A photo of the Burj Khalifa lit up in the colours of the Sri Lankan flag has been shared hundreds of times in multiple Facebook posts alongside claims that flag was displayed to commemorate Sri Lanka’s 72nd Independence Day in February 2020. This claim is misleading; the photo actually shows the Sri Lankan flag projected on Dubai's iconic skyscraper in April 2019. The flag was displayed following the Easter Sunday bombings in Colombo on April 21, 2019.

The photo of the Burj Khalifa, the world's tallest building, was published here on Facebook on February 4, 2020, the same day Sri Lanka celebrated its 72nd Independence Day. The post has been shared over 1,300 times. 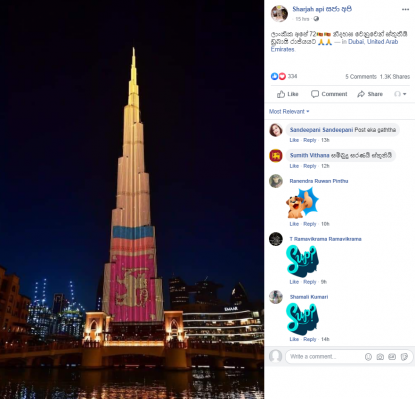 The post’s Sinhala-language caption translates to English as: “Thanks to the Dubai kingdom, for our 72nd Lankan Independence”

The photo was also shared with a similar claim here, here, here and here on Facebook.

A Google reverse image search found that the photo actually shows the Sri Lankan flag projected onto the Burj Khalifa on April 25, 2019. The photo was published by Getty Images here.

The flag was displayed following a series of bombings at churches and hotels in Colombo on Easter Sunday, April 21, 2019. Nearly 300 people were killed in the attack, AFP reported. 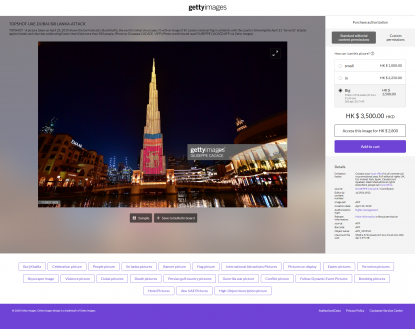 Screenshot of the Getty Images photo.

The caption states: “A picture taken on April 25, 2019 shows the Gulf emirate's Burj Khalifa, the world's tallest skyscraper, lit with an image of Sri Lanka's national flag in solidarity with the country following the April 21 "terrorist" attacks against hotels and churches celebrating Easter that killed more than 200 people.”

Below is a screenshot comparison of the photo in the misleading Facebook post (L) and the Getty photo (R): 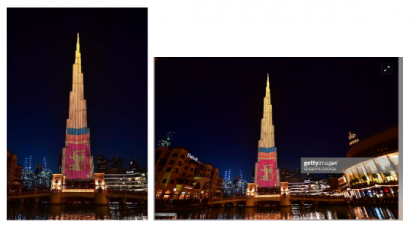 The official Twitter account of the Burj Khalifa also published this tweet on April 25, 2019 announcing that the tower was lit up with the Sri Lankan flag “in solidarity with #SriLanka”.

The lighting was also reported in local and international media here and here.