A video of two Albanian female news anchors wearing revealing jackets on-air has been viewed tens of thousands of times on Twitter alongside a claim that they dressed promiscuously in a bid to persuade people to stay indoors during the COVID-19 pandemic. The claim is false; the footage first aired on an Albanian TV channel years before the COVID-19 pandemic.

The tweet’s simplified Chinese caption translates to English as: “Trending today / Albanian TV station during the pneumonia pandemic, in order to keep citizens home and watch television, the female anchors devoted a lot”. 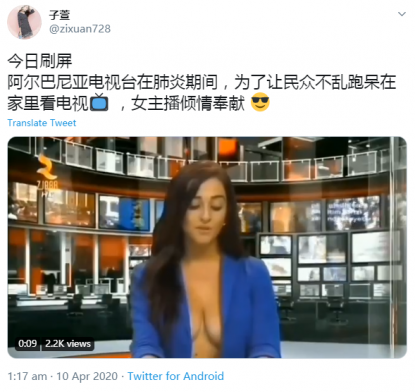 The video, which bears a “ZJARR” logo, was also shared on Twitter alongside a similar claim on Twitter here, here and here.

A reverse Google image search with video keyframes extracted from the clip found that the footage was published on YouTube here on September 27, 2017 by Zjarr Televizion. The video is titled “360° Grade -Greta, Enki, Flavia, Eliona”.

The two anchors seen in the misleading posts appear in the YouTube video from the 37-second mark to 51-second mark.

Zjarr Televizion has garnered attention and criticism for its risque news broadcasts, as AFP reported in February 2016.

"In Albania, where the news is manipulated by political powers, the audience needed a medium that would present the information like it is -- naked," Zjarr TV owner Ismet Drishti told AFP at the time. "We don't sell sex, we reproduce the news as it is. It's both symbolic and good publicity.”