US President Joe Biden prepares to sign a series of orders in Washington, DC after being sworn in at the US Capitol on January 20, 2021 (AFP / Jim Watson)

Social media posts claim videos and images of Joe Biden signing executive orders on the first day of his presidency show him endorsing blank pages. This is false; although the text on the documents is barely visible in a recording of the event, enhanced stills shows that the pages were not blank.

“Bidens in office signing blank document's!” (sic) reads the title of a video posted on YouTube. 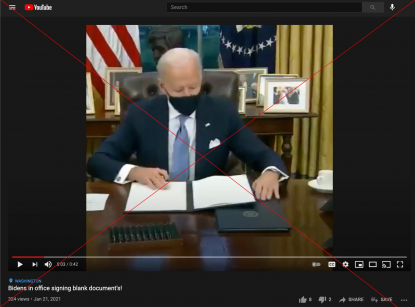 The claim is also circulating in Dutch and German.

Following his inauguration, Biden signed a flurry of executive and other orders at the White House, including to keep the United States in the World Health Organization, end the ban on entries from mostly Muslim-majority countries, bolster environmental protections and strengthen measures to combat Covid-19.

The video and images shown in the posts appear to be completely blank because the video is low-quality and overexposed.

AFP video footage shows the same event in higher quality. To compensate for slight overexposure of the papers in the video, AFP Fact Check increased the contrast of screenshots of the video by using Photoshop. This shows text on the pages in the side-by-side images below.

An AFP photographer also covered the event and produced an image (below, left) which shows text when enhanced (below, right):

US President Joe Biden signs a series of orders in Washington, DC after being sworn in at the US Capitol on January 20, 2021. The right image was enhanced to show the text on the papers (AFP / Jim Watson)

The White House has published these presidential actions on their website. They can be found with the search query “executive order.”