AFP Fact Check has debunked various social media posts that appear to share heart-wrenching stories of families hoping to raise money to treat their sick child — only the pictures used in the posts show different children, sometimes living thousands of miles away and who have already received treatment.

“PLEASE SHARE THIS STORY. THIS GIRL NEEDS HELP,” reads a post we've archived here. It was published on October 19 in 'Second Hand Cars Kenya', a private Facebook Group with more than 280,000 members. The post shares the story of a girl named Sarah, whose father Gitonga sold ‘my only plot of land’ in a desperate bid to raise funds to treat his daughter’s ‘tumor’.

“Gitonga is requesting for Kenyans of good will to come into his aid and help his only daughter undergo tumor (mouth) correctional problem. The whole surgery will cost ksh 670,000 (US$6,500 editor's note) and Sarah will smile back again.”

However, the girl in the photograph is not 'Sarah' from Kenya. Reverse image searches on Bing and Google allowed AFP to trace her image to the website of Mercy Ships, an international medical charity which offers medical care to people in developing countries from onboard its fleet of 'hospital' ships.

The photographs used in the misleading post are here. The website explains that the girl is called Hawa and was treated by Mercy Ships medics in Liberia, over 7,000 kilometres (4,500 miles) away from Kenya, where the fake Facebook post claims she's from. 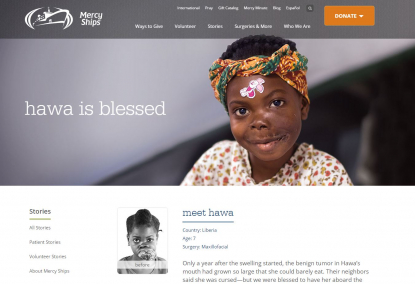 A screenshot of Mercy Ships charity website, taken on November 18, 2019

A similar post tells the story of ‘baby Johnson’, described as an orphan whose aunt and uncle are supposedly seeking to raise Ksh 170,000 (US$1,600) for a third round of surgery to drain excess fluid from his brain.

The post was shared on 'Kilimani Mums And Dads Official(Udaku Zone)', a Kenyan Facebook group with over 340,000 members. It includes photographs of a child in a hospital bed with a tube attached to their head.

Again, a reverse image search on Google led us to the website of a charity — in this case that of CURE International, which features the same images used in the Facebook post.

According to CURE, the child is a girl named Mary, not a boy named Johnson, and she was treated in Uganda, not Kenya, back in 2016. 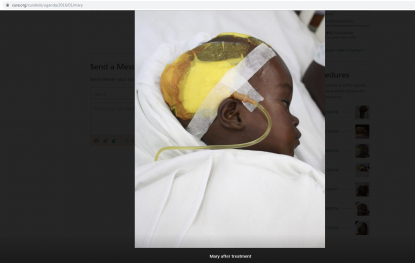 A screenshot of CURE International's website, taken on November 18, 2019

Both of these Kenyan posts were shared by the same Facebook user, a profile under the name of Emaculate Leigh. AFP reached out to them but has not yet received a reply.

We searched for 'Emaculate Leigh' on Facebook and discovered other posts that were also misleading. One of the posts shared three images of a girl with a massive tumor protruding from her mouth. The girl who was identified as ‘baby Iscar’ had apparently stopped going to school because of the tumor and her mother was now seeking to raise 250,000 Kenyan shillings (US$ 2,500) for treatment after selling a piece of land she owned.

The post was published on multiple Facebook Pages, including one with over 300,000 followers. We've archived the posts here, here, here, and here. 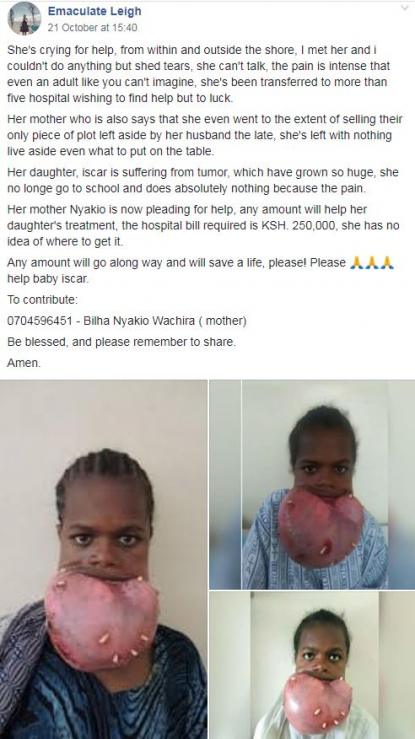 A reverse image search on Google located the first image on a Facebook page called 'Facing Africa', where the girl was identified as an Ethiopian named Zinash, and not ‘baby Iscar’. Facing Africa is a charity which helps to treat children with noma, a form of gangrene affecting the face which typically affects young children suffering from malnutrition or other disease.

Furthermore, a reverse image search on Yandex traced the photographs in the Facebook post to a documentary called 'Extraordinary People: My Face Is Killing Me', which records the story of Zinash as a medical team from the United Kingdom works to help her.

AFP tried to contact the phone number listed in the posts but the line was disconnected.

How can I avoid falling for this kind of scam?

Many online fundraising campaigns are legitimate. However, if you’re unsure whether an appeal for help is genuine, there are a few simple ways to fact-check it.

1) Run an online search for keywords that appear in the online post, such as the name of the person asking for help. How long ago was the call for help posted? Is it possible that the targets for the fundraising campaign have already been met?

2) Scroll down to read the comments. Are social media users saying the campaign is a scam?

4) If the campaign lists account details, see if they match the name of the fundraiser.