The best way to remove a tick is with fine-tipped tweezers, not soap and a cotton ball

An image has been shared tens of thousands of times on Facebook alongside claims that doctors believe "the best way" to remove ticks from your skin is by using soap and a cotton ball. However, Health Canada, the Ontario Ministry of Health and the Canadian Lyme Disease Foundation actually say the best way to remove ticks is with fine-tipped tweezers.

As concerns about tick season were reported in Canadian media, social media posts about tick removal started circulating, often shared with messages of concern or as an attempt to help friends or pet lovers.

The caption on the image states: "'I had a pediatrician tell me what she believes is the best way to remove a tick.' Apply a glob of liquid soap to a cotton ball. Cover the tick with the soap-soaked cotton ball and swab it for a few seconds (15-20); the tick will come out on its own and be stuck to the cotton ball when you lift it away." 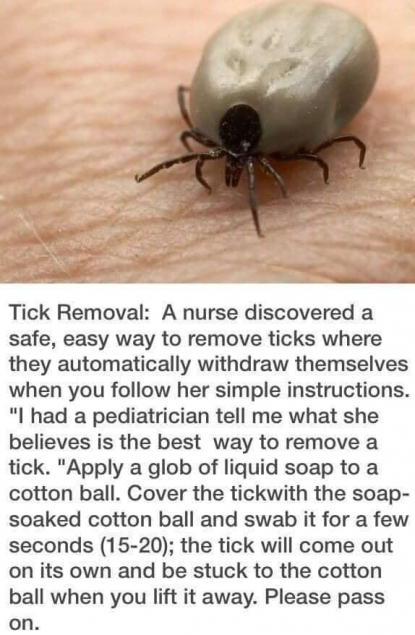 However, health officials in Canada have actually stated that the best way to remove ticks is with fine-tipped tweezers.

This the official advice on the Health Canada website about removing ticks.

It says: "Using clean tweezers, grasp the head as close to the skin as possible and slowly pull straight out. Try not to twist or crush the tick."

This is the official advice on ticks from the Ontario government.

Below is a screenshot of the advice: 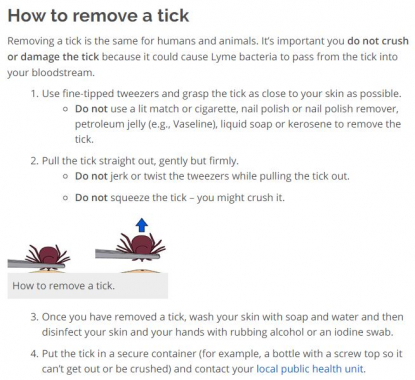 Screenshot taken on May 7, 2019 of an Ontario government web page on Lyme disease

Liam Remillard, from the Canadian Lyme Disease Research Network, also told AFP by email that the soap technique described in the Facebook post "is not the approved tick removal method endorsed by both the Government of Canada and the US Centers for Disease Control and Prevention."

Jim Wilson, President of the Canadian Lyme Disease Foundation, told AFP by email: "We do not recommend this soap and cotton ball method."

"Lyme bacteria can pass from the tick into your bloodstream if you crush or damage the tick while removing it," he stated. "This is why you should pull the tick straight out with fine-tipped tweezers."

This page on the Canadian government's website states Lyme disease, spread by the bite of infected ticks, is a threat in Canada.