That 'incredibly beautiful' photo of the Hong Kong protest? It's a cropped, mirrored image

An "incredibly beautiful" image of a mass protest in Hong Kong has been shared tens of thousands of times in social media posts that claim it shows an anti-extradition bill march in the city on June 16, 2019. The night-time picture is actually a cropped, mirrored version of an original photograph of a similar protest a week earlier, on June 9, 2019.

The image, which appears to show a Hong Kong street filled with people, was shared in this Twitter post on June 17, 2019.

Organisers say around 2 million people attended a protest in Hong Kong on June 16, 2019, against a proposed law to allow extradition to China. Here is an AFP report about the rally. 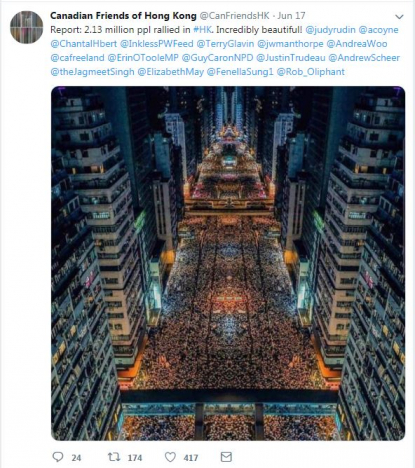 The same image was also shared on June 16, 2019, by Demosisto politician Nathan Law on his Twitter account here, where it has been retweeted more than 3,200 times with the caption:
“Official: organizer says 2 millions of people marching today. #NoChinaExtradition”.

The image was also shared on Instagram here in a post that says: “Hong Kong’s biggest protest march ever on 16th June 2019”.

The edited image does not show the Hong Kong protest on June 16, 2019; it shows a similar anti-extradition bill rally in the city on June 9, 2019.

Here is an AFP report about the June 9 demonstration, which organisers said more than a million people attended.

Its caption says: “whatever it takes. #AntiELAB #noextraditiontochina (photo is cropped and reflected).”

Cropping and reflecting are photo editing techniques which can flip and mirror an image.

The resulting image is vertically symmetrical, with even the smallest details the same on both the left and right hand sides, as shown below: 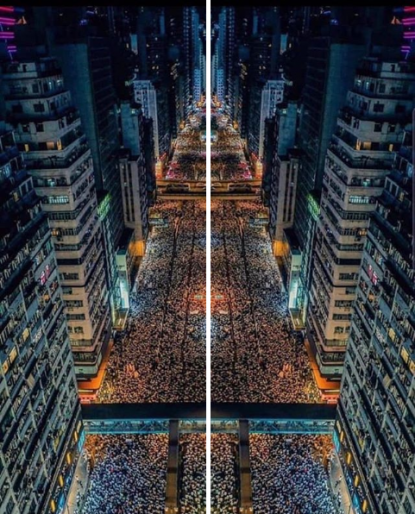 The June 10, 2019, Instagram post has a caption that says:
“You cant just ignore our 1.3mil peaceful protestors. HongKongers, rise to defend this beautiful place we call home, this is our very last and only chance tmr.”

// You cant just ignore our 1.3mil peaceful protestors. HongKongers, rise to defend this beautiful place we call home, this is our very last and only chance tmr. #反送中 #noextraditiontochina #strike

Deacon Lui, whose Instagram handle is @lsb.co, confirmed to AFP over Instagram messenger that the manipulated picture is an edited version of the above photo that he took on June 9, 2019, during the first big protest.

Below is a side-by-side comparison of the edited image (L) and the original photo (R):

Lui told AFP on June 17, 2019, that he took the original photo from a building “opposite Hysan Mall and beside Sogo” department store building, looking at Hennessy Road.

This Google Street View of Hennessy Road in Hong Kong shows the same features seen in the original photograph, including the pedestrian street bridge and the elevated road.

Below is a side-by-side comparison of the original photo (L) and the Google Street View image (R), with the matching features circled:

CORRECTION: This post was updated on June 20, 2019, to correct the spelling of a name to "Lui" from "Liu" in the third-to-last paragraph.