A photo of a rubbish-filled shipping container has been shared thousands of times in multiple posts on Facebook alongside a claim that Thailand receives tens of thousands of tonnes of "rubbish" per month from 81 countries worldwide. Research by an NGO found that Thailand imports used plastics scraps from 81 countries, but the photo is being used in a misleading context. In fact, the picture was taken by AFP and shows a shipping container loaded with rubbish in Indonesia, not Thailand.

The photo was published in this Facebook post on January 2, 2019. It has been shared more than 6,200 times. 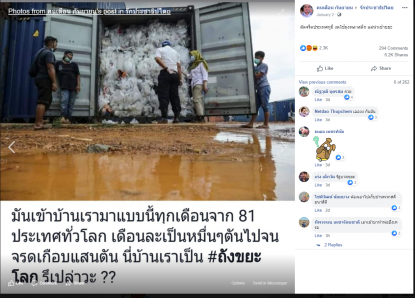 The Thai-language caption translates to English in part as: “What a pretentious country, bans plastic bags, but imports rubbish.”

The text superimposed on the image translates to English as: “It enters our country every month from 81 countries worldwide, up to tens of thousands of tonnes monthly, is our country the #worldsbin?”

The same photo was also shared here and here on Facebook alongside a similar claim.

A reverse image search found that the photo was taken by AFP in Indonesia on June 19, 2019 and published on AFP Forum here.

AFP's caption states that the photo shows officials inspecting a container "loaded with a combination of garbage, plastic waste and hazardous materials" that arrived in Batam, Indonesia in violation of import rules.

Below is a screenshot comparison of the image in the misleading post (L) and the original AFP image (R): 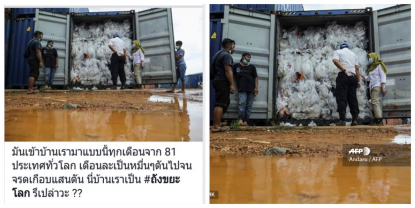 There is no official import category for "general waste", Thailand's customs department told AFP, although certain waste materials, for example some categories of plastic scraps, can be imported.

Prakob Vivitjinda, Director General of the Department of Industrial Works said in a statement sent by email to AFP on January 8, 2020:
“The import of plastic waste into the country is not allowed. Thailand has only authorised the import of plastic scraps that can be used as raw materials for new plastic products."

“81 is actually the number of countries that Thailand has imported used plastic scraps from between 2014 and 2018, not the general waste data,” Penchom Sae-Tang, Thailand director for  Ecological Alert and Recovery, told AFP by phone on January 15, 2020.

Sae-Tang provided a research document compiled by her agency titled: “The Imported Waste and Used Products in Thailand for Sustainable Waste Management."

The report, translated from Thai to English, states that over the past five years, the total amount of used plastic imported to Thailand "from 81 countries is 906,521 tonnes.”

Japan was the biggest exporter of plastic scraps to Thailand, according to the document, followed by Hong Kong, the USA, Australia and China.

Below is a screenshot of the data presented in the document: 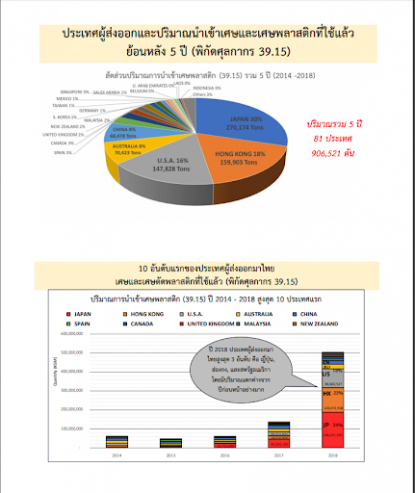 Screenshot of the research document