A photo has been shared thousands of times in multiple posts on Facebook and Twitter in January 2020 that claim it shows former Pakistani Prime Minister Nawaz Sharif dining in London after being granted bail on medical grounds following corruption charges in Lahore. The claim is false; the photo actually shows Sharif at a 2017 reception dinner with politicians in the eastern Pakistani city of Gujranwala.

The photo was published here on Facebook on January 23, 2020. 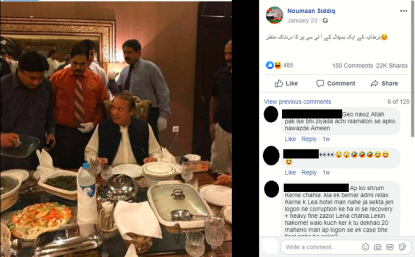 The post’s Urdu-language caption translates to English as: "A painful scene from an ICU of a British hospital".

Sharif, Pakistan’s longest-serving Prime Minister who reigned over three non-consecutive terms, was ousted of power in 2017 and imprisoned on corruption charges. He was serving a seven-year prison term when the judiciary granted him medical bail on November 19, 2019, and allowed international travel to London for a medical treatment. Sharif has since failed to adhere to the terms of his bail, refusing to send Pakistani courts his medical reports; and according to this AFP report dated March 4, 2020, Pakistan has “written to British authorities seeking his return”.

The photo was also published here on Facebook and on Twitter here, here and here, alongside a similar claim.

The claim is false; a Google reverse image search found the photo has circulated online since at least 2017. 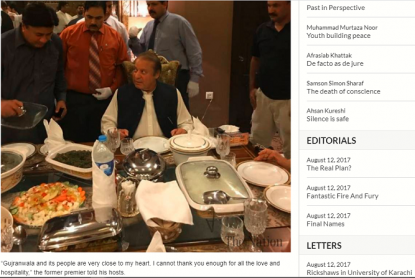 It reads, in part: “Former prime minister Nawaz Sharif on Friday visited the house of sister of Defence Minister Khurram Dastagir Khan where he was warmly received by the hosts along with other leaders of Pakistan Muslim League-Nawaz (PML-N).

“The former prime minister thanked veteran politician and senior PML-N leader Ghulam Dastagir Khan for the reception to which the latter said that Nawaz came to Gujranwala after four years.”

The photo was also published in this article headlined: “Special breakfast for Nawaz Sharif in the City of Wrestlers”, published by the local Urdu-language newspaper Daily Pakistan on the same date.

Gujranwala is often referred to as the “City of Wrestlers” after it produced some of the country’s best sportsmen.

Below is a screenshot comparison of the photo in the misleading post (L) and the photos published in The Nation and Daily Pakistan (R) :