A photo has been shared hundreds of times in multiple Facebook posts that claim it shows bodies of elderly coronavirus patients who were euthanised by their governments as a “practical” response to the pandemic. The claim is false; the photo actually shows bodies of victims in a hajj stampede in 2015; the claim about governments euthanising COVID-19 patients is an old hoax previously debunked by AFP.

The photo has been shared more than 200 times since it was published in this Facebook post on April 24, 2020.

The post's lengthy caption describes the bodies as elderly COVID-19 patients who were euthanised by their governments.

A screenshot taken on May 14, 2020, of the misleading post by Irish Irish

In a mix of Tagalog and English, the caption states in part: "Do you know why there are many dead in other countries and they're mostly the elderly? It's bcoz their governments are practical. They are thinking that if the government gives proper attention and care to seniors or the elderly, at the end the effort will be useless because they are already unproductive, so they are removed from ventilators. In short euthanasia is what they're doing that's why the dead are strewn."

The same photo was also shared here and here on Facebook alongside similar claims.

A reverse image search on Google found that the photo was taken by an AFP photographer in the aftermath of a stampede that killed thousands of pilgrims during the hajj in 2015 in Saudi Arabia.

The hajj is one of the world's largest annual religious gatherings and one of the five pillars of Islam that all Muslims must undertake at least once in their lives.

The caption of the AFP photo states in part: “Saudi emergency personnel stand near bodies of Hajj pilgrims at the site where at least 717 were killed and hundreds wounded in a stampede in Mina, near the holy city of Mecca, at the annual hajj in Saudi Arabia on September 24, 2015.” 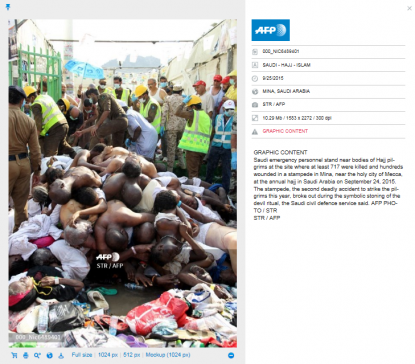 Below is a screenshot comparison of the photo in the misleading posts (L) and the AFP photo (R): 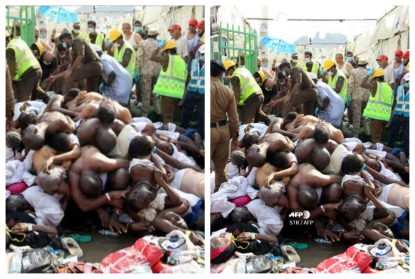 The claim that countries with high COVID-19 death tolls are euthanising elderly patients is a hoax and is not supported by reliable media or human rights reports, AFP reported here.