A section of the reinforced US-Mexico border fence in the Otay Mesa area of San Diego County, as seen from Tijuana, in Baja California state, Mexico (AFP / Guillermo Arias)

A Facebook post shared tens of thousands of times recounts a $5-million fine levied against the Golden State Fence Company for hiring employees who were not legally allowed to work in the United States. The company was fined by the government, but the hiring infractions date back to 1999 and the fine was handed down in 2006, years prior to US President Donald Trump’s campaign to build a wall along the US-Mexico border. 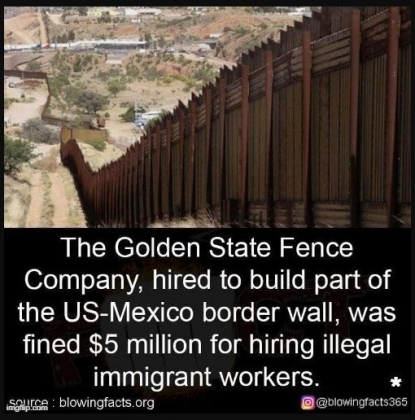 The image was shared more than 34,000 times from this Facebook post from 2018 and resurfaced again with more than 700 shares in July 2019 on a Facebook page called “Republican Family Values.”

Comments on the 2019 post indicate that people believe the company was contracted by the Trump administration as part of the president’s push to enhance wall and fencing along the southern US border:

This is false. The case against the Golden State Fence Company was heard by California Judge Barry Ted Moskowitz in 2006. This is a link to the court docket for the case.

Here is the court document dated December 14, 2006. It says: “Between on or about January of 1999 and November of 2005, within the Southern District of California, defendant Fenceworks, Inc., d.b.a. Golden State Fence Company, did engage in a pattern and practice to hire, and to recruit and refer for a fee, for employment in the United States, aliens knowing the aliens were unauthorized aliens.”

Here is a 2007 story from the San Diego Union Tribune newspaper about the case. They reported that the Golden State Fence Company’s work for the government included work on a border fence in 1997. This work was prior to the 1999 date of the court complaint about the company’s hiring processes and was carried out as part of Operation Gatekeeper, a push to curtail illegal immigration from Mexico under then-president Bill Clinton.

According to court documents, Golden State Fence Company was ordered to forfeit $4.7 million. The owner Melvin Kay paid $200,000 and his son-in-law Michael McLaughlin paid $100,000. Each served six months under house arrest according to this 2008 profile of Kay in the Los Angeles Times newspaper.

The company is still in business under the name Fenceworks. The front page of their website prominently displays the following statement: “Since December 2005, Fenceworks has voluntarily participated in the E-Verify program run by U.S. Citizenship and Immigration Service (USCIS). Through this program, all of our new employees are screened by the government to help verify their legal immigration status.”

Current work at the border

Throughout his campaign for the presidency, Donald Trump promised to build a wall along the southern US border. On January 25, 2017, five days after taking office, Trump issued this executive order directing the Department of Homeland Security to identify and allocate funding for such a barrier. Here is an AFP story detailing other main steps Trump has taken toward fulfilling his promise.

Here is a press release from the US Department of Defense announcing the recent contract awards for border wall and fence replacement. It does not include Fenceworks. In April 2019, $789 million was awarded to SLSCO Ltd of Galveston, Texas for border replacement wall construction in New Mexico. Additionally, $187 million was awarded to Barnard Construction Company of Bozeman, Montana for “primary pedestrian wall replacement” in Yuma, Arizona.

On July 26, 2019, the US Supreme Court ruled in favor of the president, allowing him to proceed with plans to divert billions of dollars in Pentagon funds towards the construction of his border wall with Mexico.

This is an actor and evangelist from Florida, preaching in Kenya -- not Jesus on an African tour