A video of Zhong Nanshan, a top Chinese medical scientist, meeting with a hospital patient has been viewed hundreds of thousands of times on Facebook, Twitter and YouTube alongside a claim that it shows him greeting a doctor in the Chinese city of Wuhan who soon after died of coronavirus in February 2020. The claim is false; the footage has actually been taken from a Chinese television programme that shows Zhong visiting a hospital ward in 2016.

The 15-second clip shows Zhong speaking in Mandarin with a hospital patient lying on a bed. Their comments can be translated to English as:

The logo for Douyin, the Chinese version of video-sharing app TikTok, can be seen in the bottom right-hand corner of the video.

The Facebook post’s traditional Chinese-language caption translates to English as: “Professor Lin Zhengbin is the leader in the field of organ transplantation in China. When academician Zhong Nanshan visited Professor Lin, the top professional of the country, Professor Lin begged, ‘save me!’ 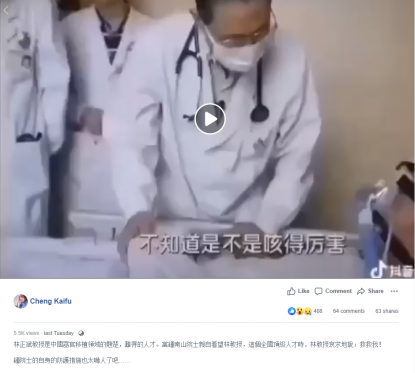 Zhong is a prominent scientist at China’s National Health Commission who helped expose the scale of the SARS outbreak that killed hundreds of people in both mainland China and Hong Kong in 2003.

Professor Lin, a chief physician at Tongji Hospital in Wuhan, who died of novel coronavirus at the age of 62 on February 10, 2020, according to Health Times, a newspaper published by Chinese state media People’s Daily.

The claim is false; the footage has been taken from a television programme broadcast by Chinese state media channel CCTV in 2016. It shows Zhong meeting with a 71-year-old patient with chronic obstructive pulmonary disease that year.

The same footage was found in this episode of the programme, Great Masters, which was published on CCTV’s science and education YouTube channel on October 12, 2016.

The video’s simplified Chinese headline translates to English as: “20161012 Great Masters respiratory specialist Zhong Nanshan”. The clip can be seen from the 21-minute 58-second mark to the 22-minute 10-second mark in the video.

Below are screenshot comparisons of the misleading video (L) and the CCTV video (R): 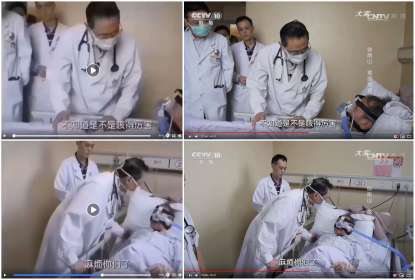 In the clip, a voiceover can be heard referring to the man in the hospital bed as a "71-year-old lung disease patient" before Zhong appears on screen.

“On a normal working day of May 2016, Zhong Nanshan was in the office of Respiratory Research Institute, having a small consultation for a 71-year-old lung disease patient through CT images. According to hospital tests, the patient had chronic obstructive pulmonary disease,” the voiceover states from the 19-minute to 19-minute 24-second in the video.