No, the Pakistani government has not granted the Lahore airport a license to sell alcohol

Media reports which have been viewed tens of thousands of times on Facebook claim that the international airport in the eastern city of Lahore will soon start selling alcohol after being issued an official liquor license. The claim is misleading, a new luxury hotel that is being built close to -- but not at -- the airport has been granted a liquor license.

A local television channel, City 42, posted a video report on its official Facebook page which has been viewed more than 70,000 times since it was published January 17. The report claims that the Lahore airport will soon serve alcohol.

“Change has come. Now liquor and beer will be available at Lahore airport,” the report says. 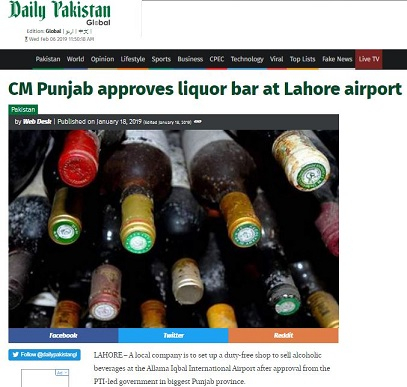 The report says: “A local company is to set up a duty-free shop to sell alcoholic beverages at the Allama Iqbal International Airport after approval from the PTI-led government”.

The misleading story has been reported by multiple other news outlets, for example Pakistan Today here.

The reports claim that a liquor license has been granted to Unicorn Prestige Limited, a local franchise holder for hotel operator Swiss International Hotels.

On November 25, 2018, Swiss International Hotels issued a press release saying that they had signed an agreement to franchise a hotel at Lahore’s International airport.

The press release is headlined: “Swiss International and Unicorn Prestige sign a franchise agreement for a new 350 luxury hotel at the Allama Iqbal International Airport in Lahore, Pakistan.”

In the body of the press release, Swiss International Hotels clarify that the hotel, which is scheduled to open in March 2019, is separate from the Lahore airport.

“Royal Swiss Lahore is strategically located at just 500 meters from the Allama Iqbal International Airport in Lahore, Pakistan,” it says.

“Along with its 350 rooms and suites, the hotel will be complemented with the Swiss International’s signature concepts; the Swiss Restaurant & Lounge, the Noodles & Rice, the TED & Co - Bar & Lounge, the Moods - Cigar Lounge, the Swiss Select Lounge, the Swiss Café Leafs & Beans, 7 Eventives Meeting venues, the Inspirations Pool & Gym and a World-Class Spa," the release says.

The company also tweeted about the new Lahore airport hotel on November 25, 2018, and posted about it on their official Facebook page here.

An AFP reporter visited the site and confirmed that the hotel is being constructed on a separate property, divided from the main airport by the Airport Avenue road.

The location of the new hotel is marked by the red pin on the map below:

The Pakistani government’s official Twitter account dedicated to debunking misinformation said that the City 42 news report about alcohol at airport was “fake news.”

Dissemination of #FakeNews is against the journalistic code of conduct. Reporting false news may cause harm to our national objectives. Spreading fake news is a punishable crime under the Prevention of Electronic Crimes Act 2016.https://t.co/jHdKQyVx3m pic.twitter.com/AyRBFqhHi4

Shahbaz Gill, a spokesman for Punjab province -- where Lahore is located -- said in a video statement posted on his Facebook page on January 17, 2019 that the reports were inaccurate.

“Today news was broadcast on some private television channels that liquor and beer will be available at the Lahore airport and it was said that the Punjab government has given permission for it,” Gill said.

“This news is incorrect and facts are being misreported. What are facts... I am going to tell you that near the Lahore airport a four-star or a five-star hotel is under construction and it is going to be completed in March,” Gill said.

“All the four stars and five stars hotels have permission (to sell liquor and beer) and this one also has same permission,” he said.

Alcohol consumption was officially banned in 1977 in Pakistan. Non-Muslims and foreigners are allowed to drink alcohol, and some four- and five-star hotels in the country have licenses to serve it.