No, this is not a photo of President Donald Trump getting sprayed with fake tan in the Oval Office

A photo claiming to show US President Donald Trump getting sprayed with false tan in the Oval Office has gone viral on social media. A reverse image search found that the picture was a staged photo by an artist known for using celebrity lookalikes. It was created before Trump was inaugurated.

The October 19, 2018 Facebook post containing the photo has a caption saying: BREAKING: Whitehouse staffer fired after taking a photo of Trump receiving a spray tan in the oval office #MAGA @postus @realDonaldTrump.

The photo shows a half-naked man being sprayed with fake tan in a tent in a room that looks like the Oval Office. 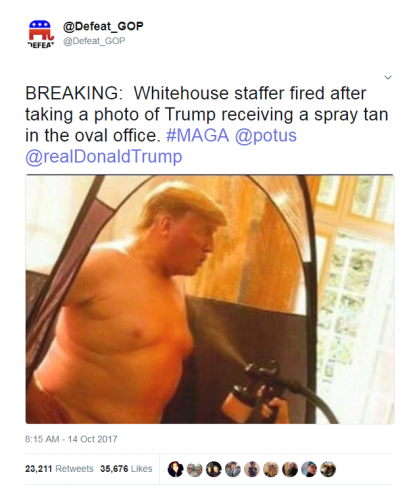 A reverse image search found that the photo was created by British artist Alison Jackson as part of her “Mental Images” series.

Alison Jackson's website says of her work: "Her notorious photographic portraits, life-like sculptures, films and videos are startlingly realistically staged affairs that cast uncannily styled actors into an entirely fathomable projection of a future that could have been".

Hannah Winchester, a spokeswoman for the artist, told AFP that the image of Trump getting a spray tan was created by Jackson.

"Yes I can confirm this is Alison Jackson’s photograph," she said.

This photo was created before President Trump took office on January 20, 2017.

The Trump spray tan Oval Office image has been circulating online since at least 2016, including in British newspaper the Mirror.