No, the man falling off a horse in a church is not rapper Kanye West

A video which has been viewed thousands of times and posted on websites and social media claims to show US rapper Kanye West falling off a horse in church. The claim is false; the man in the video is not West and the incident did not happen at his Sunday church service.

The video has been shared thousands of times here and here on Facebook and picked up by the WorldStarHipHop website here, where it was viewed more than 200,000 times.

In the 26-second clip, a man wearing a white robe rides a horse inside what seems to be a church. In the final seconds, he loses control and falls to the ground, at which point the video ends.

The quality of the video is poor, and both the audio and visuals aren’t clear. A soundtrack can be heard looping in the background.

The screenshot of a Facebook search below shows how widely this video has been shared. 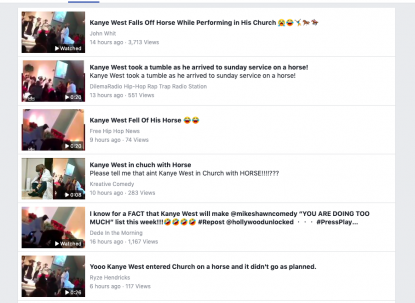 The video was also shared here on a Facebook group shown below that has racked up more than one million likes. 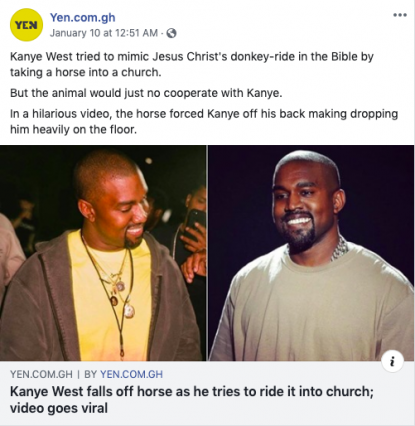 But a longer version of the video clearly shows the man is not West. The rapper's celebrity wife Kim Kardashian also confirmed her husband was not in the video.

West, a committed Christian, has recently turned his hand to gospel music and launched his own church service.

Since the first public performance of his Sunday service choir at the Coachella festival in April 2019, West has been organising impromptu services in different cities across the US, which might explain why some believed him to be the man on the horse.

A Google search using keywords like “horse” and “church” reveals the same video was posted on YouTube on January 6, 2020 with the title "Riding a horse in church".

However, this video features two angles: one filmed from the stage and another - the version widely shared on social media - shot from behind the congregation. 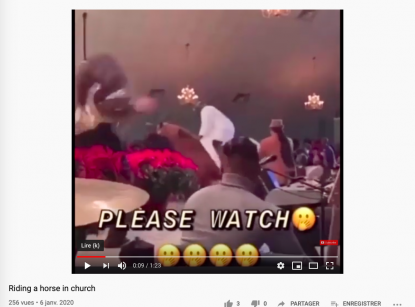 The stage angle clearly shows the individual's face and we can see it is not West.

Kim Kardashian was also quick to set the record straight, retweeting a post by Hot 97. The leading radio station based in New York had also tweeted a link to the video, claiming it was West. 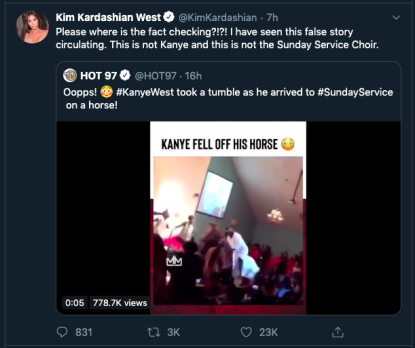 AFP was unable to confirm the identity of the man riding the horse or where it was filmed.

Fact-checking journalist in Addis Ababa
All posts
Next post

These United Nations armoured personnel carriers were on their way from Malawi to DRC; they were not on a mission to Malawi.