A video has been viewed tens of thousands of times on social media platforms in January 2022 alongside a claim it shows China launching an “artificial sun”. The video circulated online after Chinese state media reported that China had tested a nuclear fusion reactor, setting a new world record for sustained high temperatures. But the video has been shared in a false context: it corresponds with footage of a Chinese rocket launch in December 2021.

The footage shows a crowd holding up their smartphones to film what appears to be a rising fireball on the horizon.

The post's caption reads: "China launches a new artificial sun... Sun rising from the west is a sign of [the apocalypse]". 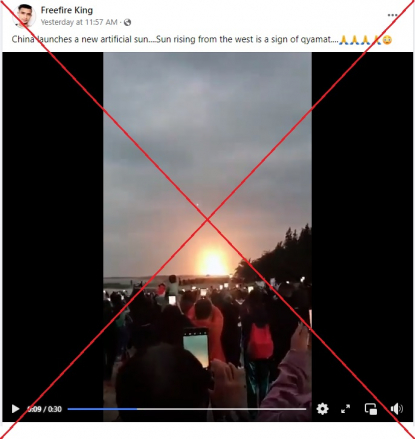 The post circulated online after Chinese state media agency Xinhua reported that tests for a nuclear fusion reactor in China -- referred to as an “artificial sun” --  had set a new record for sustained high temperatures in December 2021.

The reactor operated at temperatures five times hotter than the Sun during experiments in Hefei, capital of east China's Anhui province, the news agency reported.

The same video has been shared in posts in English, Urdu, Japanese, and Indonesian.

In the video, the crowd can be heard repeatedly chanting in Chinese; "Fire [up] the engine" and "The rocket has been launched!"

China launched a pair of satellites on a rocket at the launch site on December 23, 2021, according to the China Aerospace Science and Technology Corporation.

A similar video of the same scene was posted here on China's Twitter-like social media platform Weibo on January 7, 2022.

The post's Chinese-language caption translates as: "Glad to witness the rocket launch, so impressive".

The video shows the same beach cove lined with trees on the right-hand side.

Below are two screenshot comparisons of the video in the misleading posts (L) and the Weibo video (R): 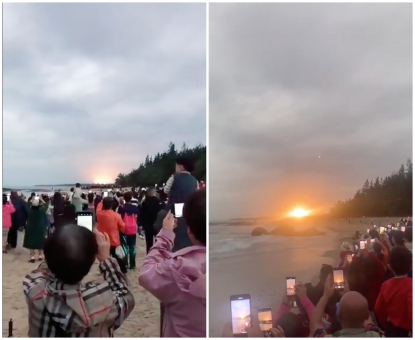 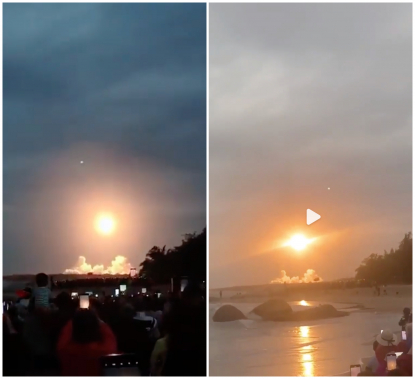 Below is a screenshot comparison of the video in the misleading post (L) and the Bilibili video (R) with similar features circled in red by AFP: