Multiple Korean-language Facebook posts have shared an image of a television report which appeared to count how often South Korean presidential hopeful Yoon Suk-yeol shook his head during a press conference. Comments from some online users on the posts indicated they believed the image shows a genuine news report. In reality, the posts shared a digitally altered report that originally circulated as satire.

The image was shared here on Facebook on January 6, 2022. 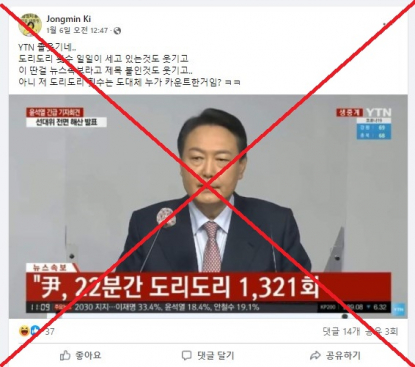 Yoon and ruling party presidential candidate Lee Jae-myung have been in a tight race, with one recent opinion poll putting Yoon ahead of Lee.

The image circulated online after Yoon held a press conference to announce a major reshuffle of his campaign team ahead of the presidential election in March.

A television chyron at the bottom of the image reads: "Yoon shook his head 1,321 times in 22 minutes."

Yoon's habit of shaking his head frequently has been referenced in previous South Korean news reports -- including here and here.

An identical image was shared on Facebook here, here, here and here.

Comments on the posts suggested some users believed the image showed a genuine news report.

"I'm more impressed by the reporter who counted this," wrote one user.

"Amazing Mr. reporter! Wow they counted all this," wrote another.

But keyword searches on Google found the image was previously shared in a satirical post on FMKorea, a popular internet forum in South Korea.

The caption to the FMKorea post reads in part: "Nobody counted [the number of times Yoon shook his head] for me, I counted it myself."

A reverse image search on Google traced the image to a longer YTN news clip posted on YouTube on January 5, 2022.

AFP reviewed the original report and did not find the purported chyron seen in the image shared in the misleading posts.

The same news report can also be viewed on YTN's website here.

Below is a screenshot comparison of the doctored image (left) and the corresponding keyframe from the original YTN news clip (right):