A video of a futuristic fireworks display has been viewed thousands of times in social media posts that claim it was taken from a firework show in Beijing on New Year's Eve 2021. However, the claim is false; the video was a digital animation based on scenery from the eastern Chinese city of Qingdao. The video creator told AFP that the "fireworks" seen in the footage were computer generated.

"Yesterday the New Year firework show in Beijing," states the traditional-Chinese caption to the video shared on Facebook on January 1, 2022. 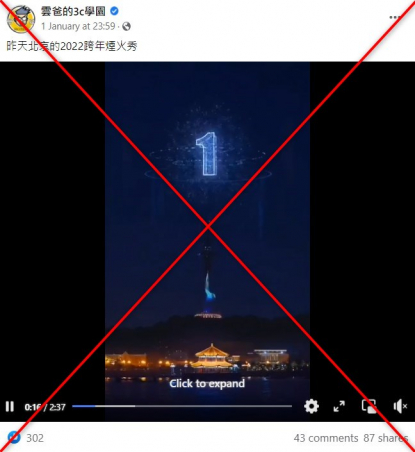 The video -- viewed more than 16,000 times since its posting -- shows various holograms floating around a tower.

It ends by displaying the logo of the Beijing 2022 Winter Olympics that the Chinese capital is hosting in February.

An identical video was also shared alongside a similar claim in Chinese-language posts on Facebook and Twitter.

"This video is taken in Beijing," one commenter wrote. "Beijing," said another.

In reality, the video shows digital animation using scenery from Qingdao in eastern China -- not the capital Beijing.

A reverse image search on Google found the original video published on Douyin by a creative studio called RenjiaView on December 31.

Below is a set of screenshot comparisons of the video in the misleading post (L) and the Douyin video (R). 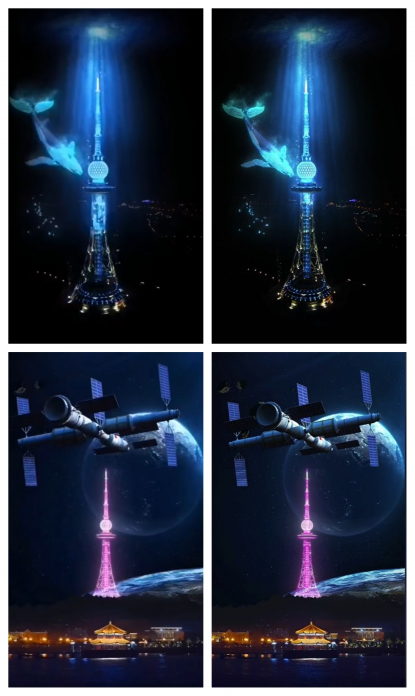 A screenshot comparison of the video in the misleading post (L) and the Douyin video (R).

RenjiaView has also published the same video on their official video account on Chinese messaging and social media app WeChat, as seen in the screenshot below.

A screenshot, taken on January 11, 2022, of the video published by RenjiaView on their WeChat Video account.

The caption to the video reads: "2022 Happy New Year! Qingdao TV Tower AR light show opens the door to a whole new world of the Metaverse".

In response to misleading claims about the video, RenjiaView founder Lu Hui told AFP the video was based on actual scenery taken in Qingdao and was digitally animated with Augmented Reality technology.

He also confirmed the fireworks seen in the video are computer-generated images, while the Qingdao TV Tower and the base lighting for the tower are real.

He shared to AFP the screenshots below showing the original footage of Qingdao and with digital animation effects added in.

A screenshot comparison of select frames taken from this video before and after the computer-generated effects are added in.

Qingdao's southern district government was involved in the production of the video, according to this official announcement.

The Qingdao TV Tower in the video corresponds to this street imagery in Taiping Hill, Qingdao on Baidu Maps.

A screenshot, taken on January 7, 2022, of the Qingdao TV tower in Baidu Map.