Skip to main content
A police officer holding an umbrella stands guard in front of the National Assembly in Seoul on August 27, 2020. ( AFP / Jung Yeon-je)

Multiple Facebook posts circulating in early January 2022 criticise South Korean lawmakers for apparently approving a pay rise for themselves of about 13 percent. However, this claim is misleading. Weeks before the posts circulated online, the South Korean government approved a plan that would increase government workers' salaries by 1.4 percent. A spokesperson for South Korea's parliament told AFP that lawmakers' pay rise would not be higher than the figure stated in the plan. An expert on South Korean public administration told AFP a 13 percent hike in lawmakers' salaries was unlikely.

The claim was shared here on Facebook on January 2, 2022. 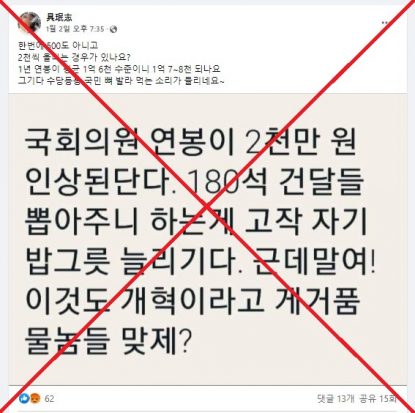 Screenshot of the misleading claim shared on Facebook. Captured January 4, 2022.

The Korean-language text in the graphic claims South Korean lawmakers' salaries will be increased by 20 million won (US$16,700) -- equivalent to about 13 percent -- this year.

The post claims: "The annual salary of a lawmaker will be raised by 20 million won. These gangsters were given 180 seats and all they do is [increase their pay]. But look! Won't they argue that this is also reform?"

The caption alongside the post reads in part: "I can hear them sucking the bones of [South Korean] people dry."

A similar claim was shared on Facebook here, here, here and here.

A spokesperson for South Korea's parliament told AFP on January 4 that lawmakers' salaries were set to be increased by 1.4 percent this year, which corresponds to the same percentage raise included in a plan approved by the government in December 2021.

"This [pay rise of 1.4 percent] will be applied across the board in the government, and lawmakers' salaries will be adjusted to match this figure," the spokesperson said. "This raise of 1.4 percent [for lawmakers] does not correspond to 20 million won."

AFP found a government press release published on December 28, 2021 that states all South Korea's government workers would receive a pay rise of 1.4 percent in 2022.

Professor Im Tobin, an expert in public administration at Seoul National University, told AFP that a 13 percent salary increase for lawmakers would be highly unlikely in South Korea.

"Since the matter of lawmakers' compensation is a politically sensitive issue in South Korea, [salary increases] are typically fixed to regular pay hikes for government workers in general," Im said.

"It is unlikely that lawmakers have given themselves a 20 million won increase this year, nor have there been comparable increases in recent years."