Video does not show 'patriotic Chinese women fighting over Taiwan'


A video has been viewed tens of thousands of times on Twitter and Facebook alongside a claim it shows two "patriotic" Chinese women attacking each other's children in the eastern Chinese city of Nanjing following a dispute over "the reunification of Taiwan". The posts circulated online amid strained tensions between China and the US over the self-ruled island, which China claims as its own territory. The video, however, has been shared in a misleading context: it has circulated in Chinese news reports about two parents fighting in China's Xuzhou city. The reports -- which contain no reference to Taiwan -- suggest the fight erupted over a personal dispute.

“The patriotic elderly women in Nanjing were very excited," writes this Twitter post dated January 3, 2022. "They began a dispute over the reunification of Taiwan by force, and ended up turning violent and kicking the children to vent their resentment."

It shows two women fighting and assaulting each other's children.

Nanjing is a city in China's eastern province of Jiangsu. 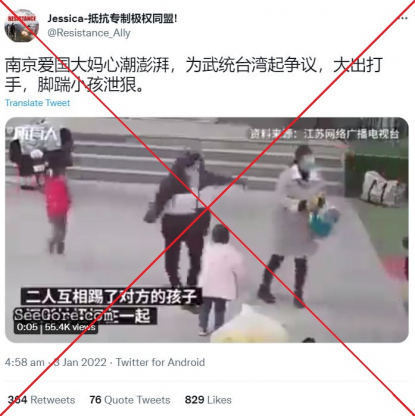 The video was also shared with a similar claim such as here on Twitter, and here on Facebook.

The corresponding video can be seen from the six-second mark of the Bilibili video.

Below are two screenshot comparisons of the video shared in misleading posts (L) and the Bilibili video (R): 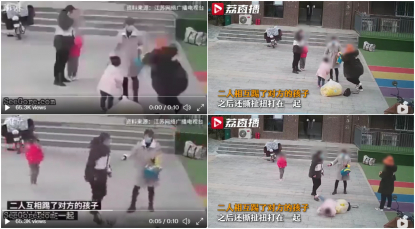 The video uploaded by Jiangsu Broadcasting Corporation is titled: “Too bad! Parents kicked each other's children because their children tripped, and [one of them] attacked the police!”

The video caption reads: "On March 12, two children in Xuzhou chased and fell to the ground when playing, and two parents clashed during discussion. They kicked each other's children and fought against each other. A community police officer was attacked by one of the parents when trying to resolve the issue at the scene. On March 13, the parent was detained by the police on suspicion of assaulting the police officer."

Xuzhou is also a city in Jiangsu province, more than 300 kilometres (186 miles) to the northwest of Nanjing.

In the longer video, Chinese characters at the two-second-mark read: "Two children chased and fell to the ground when playing / Two parents clashed during a discussion".

In a filmed interview, one of the women involved in the altercation can be seen telling the police that she attacked a police officer following the altercation with another woman.

She says she did this "out of impulse" and she does not make any reference to Taiwan.

The reports show the same interview with a woman involved in the altercation and they also do not include any reference to a dispute over Taiwan.