A claim circulated online in South Korea in late December 2021 that neighbouring Japan had "declared the end of Covid". The posts were shared as coronavirus infections in South Korea soared while Japan saw a decrease in cases. But as of January 4, 2022, Japanese authorities have not made any such declaration. In fact, officials have warned of a possible rebound in cases from holiday travel and the fast-spreading Omicron variant.

"Japan with a population of 140 million declared the end of Covid-19," reads a Korean-language post shared on Facebook on December 28, 2021. 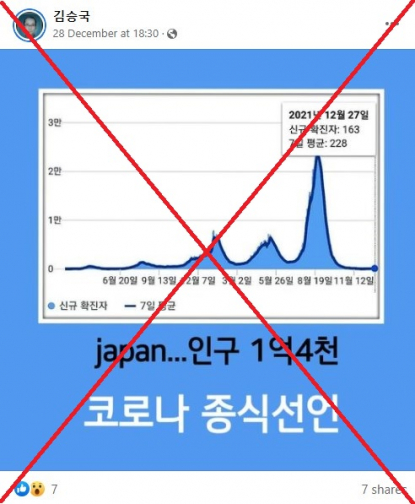 The post shared a graph of daily Covid cases reported in Japan as of December 27, 2021.

It shows daily reported cases in Japan plummeting to 163 on December 27 after cases surged to over 25,000 in late August.

"[Korean] countermeasures? They're just a self-flattering move," one social media user wrote in response to a post.

In contrast to the downward trend in Japan's cases in December, daily infections in Korea soared to a record high of nearly 8,000 on December 15.

The country added more than 3,000 new Covid infections on January 3, according to the Korea Disease Control and Prevention Agency.

Despite the low number of infections in December, Japanese authorities have warned there could be an uptick in new cases following the holidays and suspected cases of the Omicron variant.

"[The Japanese government] while simulating the worst-case scenario of an expansion in infections in Japan, is doing its best in moving ahead with plans to provide third vaccine shots, the expansion of free PCR tests and supply of treatment pills," Kishida said in a video message.

She said people should "regularly open windows even in cold winter" and added basic measures against infectious diseases are "effective" against Omicron.

Japan recorded over 500 new Covid cases on January 2, according to the country's Ministry of Health, Labour and Welfare.

Keyword searches on Japanese government websites did not find posts that the country "declared the end of Covid".

The claim in the misleading posts that Japan has "a population of 140 million" is also inaccurate.

As of December 1, the country's population was 125,470,000, according to the Japan Statistics Bureau.