This photo shows a temple in India that dates back about 1,200 years

A photo has been shared hundreds of times in Chinese-language social media posts that claim it is a "rare" image of the ruins of a 7,000-year-old imperial palace in India. The claim is false; the image shows the Vettuvan Koil, a temple in South India that dates back to the 8th century.

"The imperial palace of India [built] 7,000 years ago, very rare to get to see this," reads a Facebook post in traditional Chinese-language on December 24, 2021.

The photo shows an elaborate structure in a huge pit. 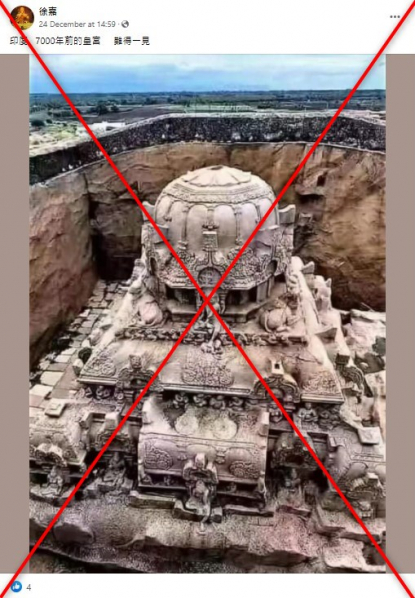 A screenshot of a misleading post taken on December 30, 2021

The same photo was shared in similar posts on Twitter and on the Chinese version of TikTok, Douyin.

A reverse image search on Google found the same photo in a travel blog post from late 2021.

It describes the monument as the "Vettuvan Koil" in the South Indian state of Tamil Nadu:

A screenshot of the photo in a travel blog, taken on December 31, 2021

The monolithic temple dates back to around 760-800 CE, according to an article in the New Indian Express by R H Kulkarni, professor of art history at Karnataka Chitrakala Parishath in Bangalore.

"Vettuvan Koil, dedicated to Lord Siva, is a small monument with a rectangular plan. It is excavated about 7.5 metres deep into the rock," he wrote.

"The lower portion of the monolith is unfinished while the upper portion has been completed with beautiful sculptures."

The Government of Tamil Nadu's Department of Archaeology -- which features various photos of the temple on its website -- also states it dates back to the 8th century.

An image of the Vettuvan Koil tagged at the temple's location on Google Maps corresponds to the photo shared in the misleading posts: