The Bengali-language caption reads: “This photo proves that everything is possible by the Creator. Praise to Allah”. 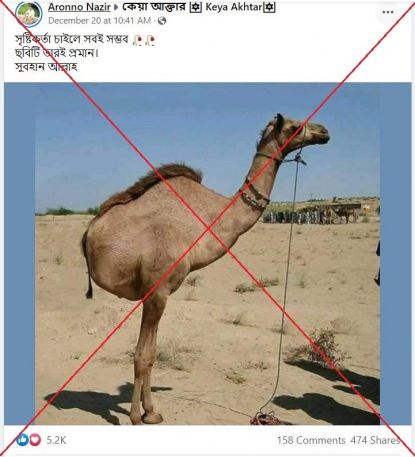 The same image was also shared here, here and here with a similar claim in Bengali language.

It has also circulated in English-language posts -- here, here, and here -- since at least March 2018 that claim it shows a camel maimed by a land mine explosion.

However, the image has been doctored to remove the camel's hind legs in the original photo.

Keyword and reverse image searches found an earlier version of the photo published in a blog post on March 23, 2012.

It was uploaded by Dr Abdul Raziq Kakar, who describes himself as an animal scientist on his LinkedIn profile.

Raziq Kakar told AFP that he took the photo in Pakistan's Sindh province in around 2008.

"Yes, I shot this picture myself in Miti Thar district, Sindh, Pakistan. Later someone edited it with Photoshop and removed two legs," said Raziq Kakar.

On his YouTube channel, Raziq Kakar has previously posted footage of camels in a desert in Pakistan's Balochistan province.

The same photo of the four-legged camel was also shared here on a wallpaper-sharing website.

Below is a comparison between the doctored photo in the misleading Facebook posts (L) and the original photo (R):

A mirrored version of the photo was also published here on US-based website Animal Picture Society.

Below is a screenshot comparison of the doctored photo (L) and the photo published on Animal Picture Society (R):