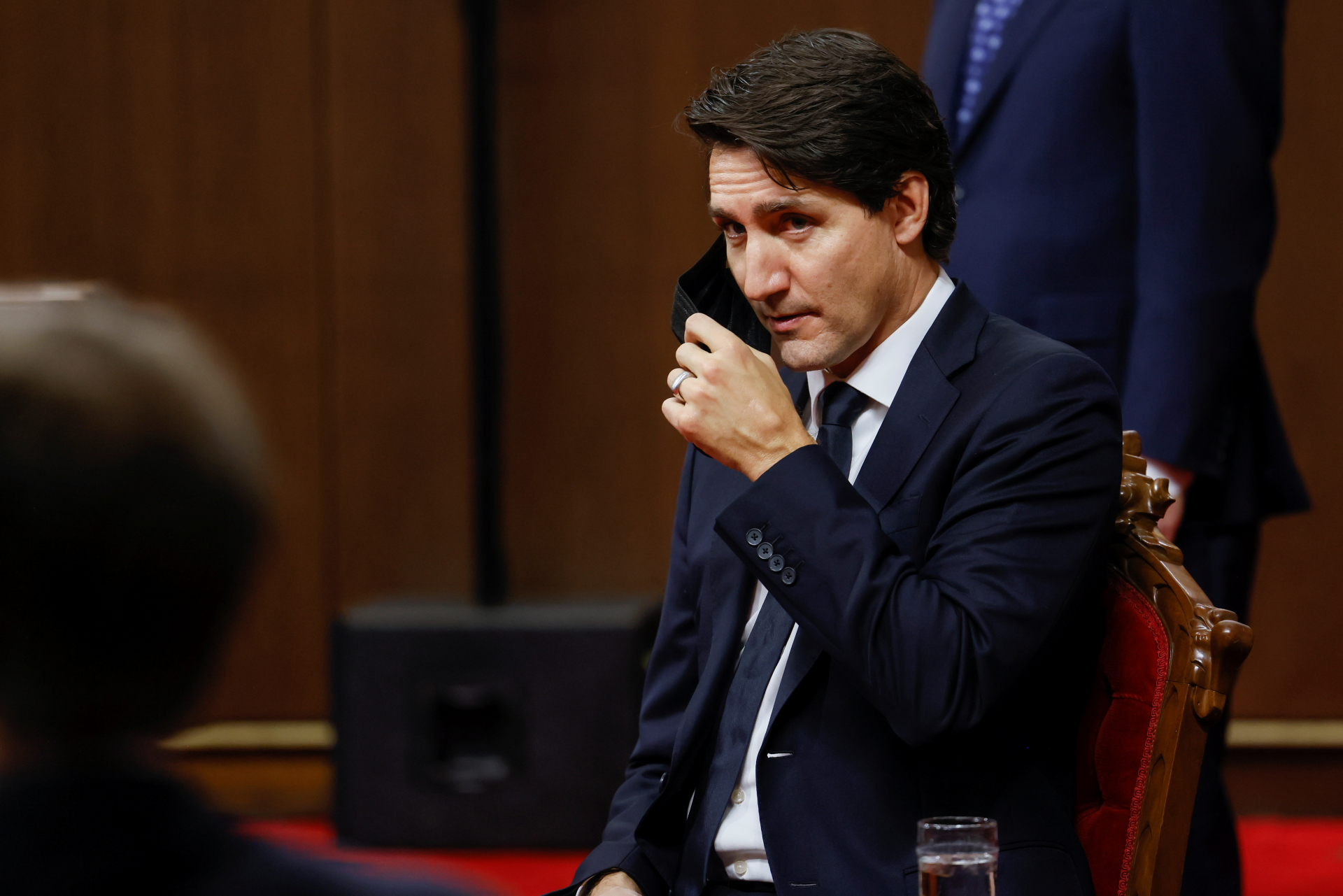 Canada's Prime Minister Justin Trudeau removes his face mask as he listens to Governor General Mary May Simon (not pictured) deliver the Throne Speech in the Senate chamber in Ottawa, Ontario on November 23, 2021 ( POOL / Blair Gable)

Social media posts feature a clip of Canadian Prime Minister Justin Trudeau speaking about "attacking fundamental rights," with some suggesting he was referencing his government's response to Covid-19. But the clip has been misleadingly edited, and the Liberal leader was answering a question about part of the Canadian Charter of Rights and Freedoms, not speaking about the pandemic.

"Let's not forget Canada, that moment Trudeau openly said they know they are ATTACKING your fundamental rights but they're still gonna go ahead and do it. #WakeUpCanada #covidisahoax," says text of a December 20, 2021 Facebook post that includes the video of Trudeau.

But the clip shared on social media has been edited to cut out key parts of the remarks by Trudeau, who has imposed strict vaccination mandates for traveling, with most people not vaccinated against Covid-19 barred from boarding a plane or a train in Canada since November 30.

The clip was taken from a December 16 interview with the national news agency, The Canadian Press.

In the full video of the year-end roundtable interview, it is clear that Trudeau was not speaking about his government's actions during the pandemic, or advocating an attack on citizens' rights. He had been asked about the "notwithstanding clause," Section 33 of the Canadian Charter of Rights and Freedoms.

Both his initial reference to the notwithstanding clause, and his subsequent comment saying "that's why I agree with my father that it is not a great thing to have in a Charter of Rights and Freedoms," were cut from the clip circulating on social media.

The rarely used provision was included as a compromise by former prime minister Pierre Elliott Trudeau to secure the provinces' consent to the Charter's creation in 1982. It gives a province the ability, through the passage of a law, to override certain portions of the Charter for a five-year term.

It surged back at the top of the national political agenda when Quebec invoked the clause to introduce a secularism law (Bill 21) prohibiting civil servants from displaying religious symbols -- which recently led to a teacher being reassigned for wearing a hijab in the classroom -- and a law (Bill 96) proposing reforms relating to the French language.

AFP asked the prime minister's office about the interview, but did not receive a reply by the time of publication.

More of AFP Fact Check's articles from Canada can be found here.