A video of an empty train station in the eastern Chinese city of Hangzhou has been viewed tens of thousand times in social media posts alongside a claim about trains being suspended due to a "breaking news" incident during the pandemic. The posts circulated online in December 2021 after Hangzhou faced a new Covid-19 outbreak. The video, however, has been shared in a misleading context; it was taken from a news report filmed in August 2019 when a typhoon hit eastern China, months before the country reported its first Covid-19 cases.

The video was shared here on December 12, 2021 on Douyin -- the Chinese version of TikTok.

The post's simplified Chinese-language caption translates as: “The endless pandemic, let’s cooperate with the prevention and control work! Staying at home is the safest #ReportOnTheScene #BreakingNews".

In the video's top left-hand corner, there is a logo for Zhejiang News Channel, which is run by Chinese state-owned Zhejiang Radio and Television Group.

“Hangzhou East Station. It is the first time that the station has been seen empty since it started operation in 2013,” the headline seen at the beginning of the video reads.

"There are no visitors here except for some staff. There were eight trains in operation this morning. Since around 11:20 am, all the trains in the station were suspended.” 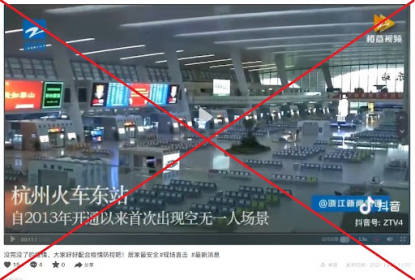 Hangzhou is the capital of China’s Zhejiang province, a major industrial and export hub on the country's east coast.

The video circulated online as Zhejiang faced a new Covid-19 outbreak that left half a million people quarantined and some districts under business shutdown in December 2021.

The latest resurgence occurred in three cities in the province since December 5, including Hangzhou, where hundreds of flights had been canceled and several publicly listed companies had suspended production, AFP reported.

The same footage has been viewed more than 53,000 times on Twitter here after being shared on December 12 by popular Chinese blogger Fang Shimin, also known by his pen name Fang Zhouzi.

It also circulated in many other misleading posts about the pandemic -- including here and here on Twitter; and on Douyin here, here, and here.

Comments on the posts suggested some people mistakenly believed the video was filmed after the recent Covid-19 outbreak in Hangzhou.

“Hope the pandemic will end soon,” one viewer wrote.

Another Douyin user wrote: “The pandemic in Hangzhou is so serious. Should wear a mask when you go out and stay safe.”

Reverse image search combined with keyword searches found that the video actually shows an empty train station in Hangzhou after a typhoon hit the city in August 2019.

The original video was published here on August 10, 2019 on the official Weibo account of Zhejiang News Channel.

The Chinese-language caption in the post translates to English as: “This is the empty waiting hall of Hangzhou East Railway Station. It is the first time that the station has been seen empty since it started operation in 2013. As of 11:20 am today [August 10, 2019], all the trains in the station were suspended.”

Below is a screenshot comparison of the video in the misleading post (L) and the original post published in 2019 (R):

The video shows the scene at Hangzhou East Railway Station after Typhoon Lekima made landfall in east China on August 10, 2019.

According to a report published here by Chinese local media outlet Zhejiang Online, trains were suspended at Hangzhou railway station after the typhoon. 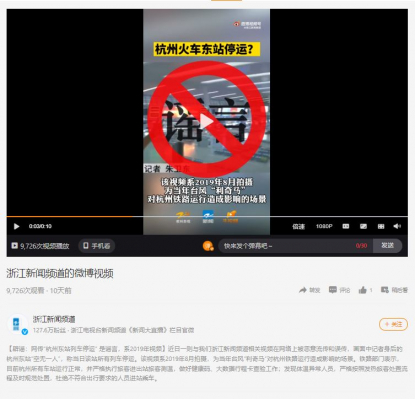 The Weibo post's caption translates to English in part as: “The circulated claim about "trains suspended at Hangzhou East Railway Station" is misleading, the video was filmed in 2019.”

According to the report, the Hangzhou Railway Department said all stations in Hangzhou were operating a normal service.