Two images have circulated on Twitter alongside a claim they show the teenage son of a Hong Kong celebrity couple wearing pro-democracy T-shirts. The posts emerged after the teenager sparked anger from some Chinese social media users by suggesting on Instagram that semi-autonomous Hong Kong is "not in China". But the images have been altered from an old photo of the teenager in which he was wearing a sports T-shirt without any pro-democracy slogans.

One of the images was published here on Twitter on December 14, 2021.

The post's caption reads: "Hong Kong is not China??"

A slogan purportedly emblazoned on Morton's T-shirt reads: "HONG KONG IS NOT CHINA".

It was also shared here on Twitter alongside the same claim.

The other image was posted online on Twitter here on December 15, 2021:

It appears to show Morton's T-shirt emblazoned with Chinese characters that translate as "Hong Kong" and "add oil".

A sweeping national security law imposed by Beijing on Hong Kong last year has criminalised much dissent including many slogans once used by democracy protesters.

Among the offences is secession – separating Hong Kong away from the mainland – which “Hong Kong is not China” would fit into under the new law.

“Add oil” is a ubiquitous message of encouragement in multiple Chinese languages, but it has still landed Hong Kongers in hot water with the authorities. Runners at the Hong Kong Marathon were told to remove or cover up clothing that displayed the slogan in October 2021.

The two images of Morton circulated online after he suggested on his Instagram page that Hong Kong -- a former British colony that was handed back to China in 1997 -- was not "in China".

However, both images have been manipulated.

Below are two screenshot comparisons between the images shared in the Twitter posts (L) and the 2019 photo uploaded by huanqiu.com (R): 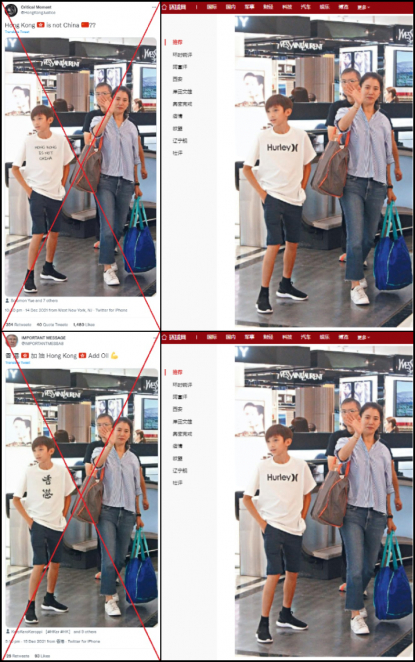 Screenshot comparisons between the images shared in Twitter posts (L) and the photo uploaded by huanqiu.com (R)

In the original photo, Morton's T-shirt displays the logo of US clothes company Hurley.