As the latest polling in the Philippines put the son and namesake of former dictator Ferdinand Marcos as the current leader in the presidential race, a photo was shared thousands of times on Facebook that appeared to show portraits for late Filipino democracy icons had been replaced with an illustration of a small primate in a new 500 peso banknote design. The photo circulated online after the Philippine central bank showcased a new 1,000 Philippine peso note design featuring an eagle instead of Filipino war heroes -- prompting concerns that history was being revised. But the purported banknote shared in Facebook posts has been manipulated to include the small primate; it was created in 2017 by a Russia-based artist, who told AFP he did not create the design for the Philippine central bank.

The post's caption claims the image shows new banknotes from the Philippine central bank -- known in the Southeast Asian country as the "Bangko Sentral ng Pilipinas" or "BSP".

The purported image of the new 500 peso note includes an illustration of a tarsier -- a small primate native to Southeast Asia -- instead of Filipino democracy icons former president Corazon Aquino and her husband Benigno Aquino Jr.

It was shared alongside a genuine design for a new 1,000 peso note that features a Philippine eagle, replacing images of Filipino war heroes.

Local media Inquirer.net reported that this prompted concerns in early December that images of late democracy icons would also be replaced. 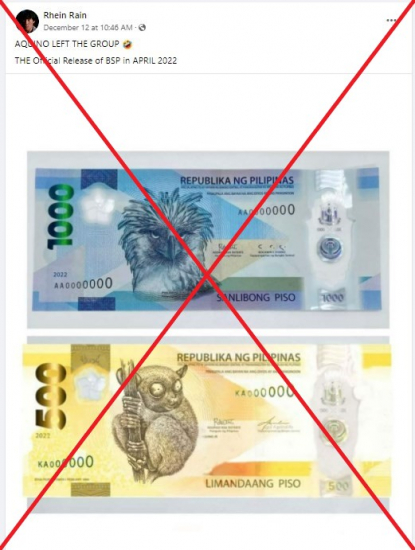 A screenshot of the misleading post taken on December 20, 2021

The post contains a reference -- "AQUINO LEFT THE GROUP!" -- to the political rivalry between the Aquinos and the family of the dictator Ferdinand Marcos.

Both former president Corazon Aquino and her husband Benigno were opponents of Marcos. The couple's son -- former president Benigno Aquino III -- had been a vocal critic of incumbent Philippine President Rodrigo Duterte.

Ferdinand Marcos Jr -- son and namesake of the late dictator -- is the frontrunner to replace Duterte in 2022 according to a recent survey.

Sara Duterte-Carpio -- daughter of Duterte -- has been announced as Marcos Jr's running mate, cementing the alliance between the two powerful families.

The images of the banknotes were shared in similar Facebook posts here, here, and here.

"This is better than the image of the fake heroes!" one Facebook user wrote.

"Congratulations BSP, Salute to the people who made this great reform," another one commented.

The Philippine central bank said it did not issue the design for the 500 Philippine peso banknote shown in the posts.

Turaev told AFP he was not commissioned by the Philippine central bank to create the design.

"I drew this image in November 2017," he told AFP on December 20. "The Philippine Central Bank has not contacted me."