Skip to main content
Labourers work next to the model of Ram Temple of Ayodhya at a stadium in New Delhi on November 3, 2021. ( AFP / Sajjad HUSSAIN)

Multiple Facebook and Twitter posts circulating in India have shared a song with the claim that it had been "composed by Muslims" to stoke anti-Hindu sentiment months before the elections in the country's northern Uttar Pradesh state. But the composer of the song told AFP he is Hindu -- not Muslim. News reports describe the composer as a right wing Hindu nationalist with anti-Muslim views.

The song could be heard in this 29-second long clip shared on Facebook on November 7.

The Hindi-language lyrics translate to English as: "If Samajwadi Party is voted to power, the construction of Ram temple will cease. Muslim flags will fly and saffron (Hindu) flags will be brought down."

The post's caption states: "This song composed by Muslim community is an eye-opener for Hindus. We can see the truth of the Samajwadi Party. Even then some idiotic Hindus in the name of caste are dreaming to see Samajwadi in power.” 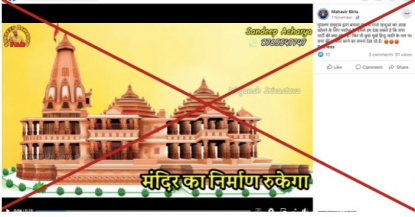 Samajwadi is a political party in India. It is taking on the country's ruling Hindu nationalist Bharatiya Janata Party (BJP) in an upcoming election in the north Indian state of Uttar Pradesh in early 2022.

The post makes a reference to the temple for the Hindu god Ram that is under construction in Ayodhya in Uttar Pradesh.

Indian Prime Minister Narendra Modi launched construction in August 2020 in a site that has become a symbol of India's Hindu-Muslim divide.

A 16th century mosque called Babri used to sit on the same patch of land. In 1992, tens of thousands of Hindus tore down the mosque to pave the way for a temple.

The clip was also shared with a similar claim on Facebook here and here; and on Twitter here.

But the composer of the song is Hindu -- not Muslim as the posts claim.

AFP found the clip had been taken from an original six-minute 55-second song uploaded here on YouTube on September 30.

The description credits the song to Sandeep Acharya.

Responding to the false posts, Acharya told AFP: "The song has been composed and sung by me, it was not composed by any Samajwadi Party member or a Muslim. I am a Hindu and a BJP supporter."

Acharya also said in his Facebook post on October 8: "Some Hindus think this song is anti-Hindu. But this song has been composed by me to warn my Hindu brothers that if the Samajwadi Party comes to power then these things might happen."

Portions of the original song translate to English as: "If our Hindu religion is not saved then what else can be saved" and "I sing what our Hindu God Rama commands me to sing".

Indian news organisations The Quint and D-FRAC separately published reports about Acharya that describe him as a right-wing Hindu nationalist with anti-Muslim views.