This video of a home being shaken by an earthquake was filmed in Alaska, not Indonesia

A video that shows the inside of a home shaking has been viewed tens of thousands of times in social media posts that claim it was filmed after an earthquake that struck eastern Indonesia on December 14, 2021. The claim is false: the video has actually circulated in reports since November 2018 about an earthquake that rocked Anchorage, the largest city in the US state of Alaska. No deaths were reported after either earthquake. 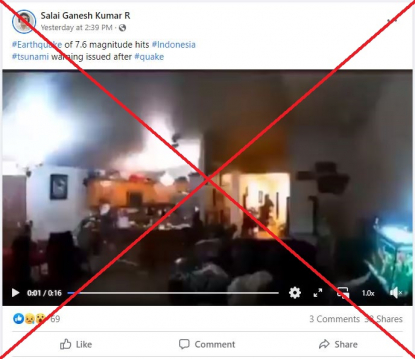 A 7.3-magnitude earthquake struck eastern Indonesia on December 14, 2021, the US Geological Survey said, with monitors briefly warning of the possibility of hazardous tsunami waves before lifting the threat.

The epicentre was north of the island of Flores in Indonesia's East Nusa Tenggara province, where the quake sparked terror after hitting in the late morning.

No significant damage or deaths were immediately reported from the areas where the quake was felt, but authorities urged residents of affected areas to not panic but seek a safe location away from the shore.

The video has been viewed more than 20,000 times after it was shared with a similar claim on Facebook here and here; and on Twitter here, here, and here.

It has also been viewed more than 61,700 times in a TikTok post from Indonesia here; in Chinese-language posts on Weibo here and here; in Facebook posts from Pakistan here; and from Thailand here.

A reverse image search followed by keyword searches on Google found a similar video published in a Twitter post here on December 1, 2018.

James Easton -- the user who uploaded the video to Twitter -- told local radio station KTOO that he recorded the footage in his tweet.

Below is a screenshot comparison of stills from the video in the misleading post (L) and the video shared on Twitter in 2018 (R):

The video -- credited to Easton -- was also shared on YouTube in news reports by local outlets in Alaska, including by KTOO here.

Another local news outlet, KING-TV, shared the video on YouTube here on December 1, 2018.

The 7.0 magnitude earthquake left several people wounded, mainly from broken glass and falling objects, but no deaths were reported, according to US media.