A video has been viewed tens of thousands of times in posts in early December that claim it shows the chief of BioNTech -- the company that developed a Covid-19 jab with Pfizer -- admitting he has not been vaccinated against the coronavirus. The posts circulated online as scientists tested the Pfizer-BioNTech vaccine's efficacy against the Omicron coronavirus variant. But the video has been shared in a false context; it shows an interview with Ugur Sahin in late 2020 in which he said he would not jump the vaccination "priority" line. Sahin was vaccinated in early 2021, BioNTech told AFP.

"Ugur Sahin, CEO of BioNTech, who helped Pfizer develop the mRNA COVID vaccine, admits that he is not vaccinated," reads this Chinese and English-language Twitter post on December 6.

The post shared a video of Sahin being interviewed by a journalist.

In the clip, the journalist asks him: "I have heard that you yourself have not taken the vaccine yet, why not?"

Sahin responds: "So, I am legally not allowed to take the vaccine at the moment."

Pressed further why he was not "allowed" to take the vaccine, Sahin answers: "Because you know that there is a priority. The vaccine is not allowed to be taken outside of this priority." 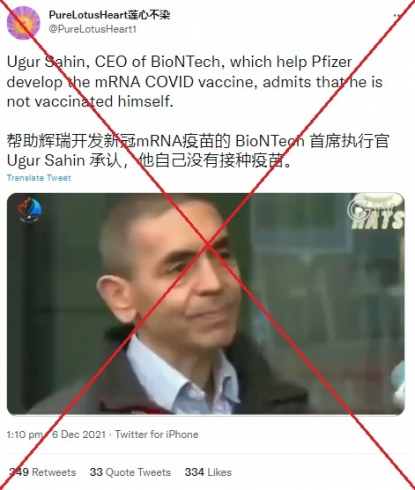 The same video was shared in December alongside a similar claim on Twitter here, here and here; and on Gettr here.

A microphone with a "DW" logo can be seen in the video at its one-minute and 27-second mark.

Keyword searches found a longer version of the video was earlier published by German broadcaster Deutsche Welle -- known by its acronym DW -- on December 22, 2020.

It was uploaded days before a 101-year-old woman in an elderly care home became the first person in Germany to be inoculated against the novel coronavirus on December 26, 2020, as AFP reported.

Elderly care home residents, people aged 80 and over, and care workers were given priority for the jab.

The video in the false posts corresponds to portions of the DW video starting from its four-minute and 50-second mark.

Below are two screenshot comparisons of the video shared in the false posts (L) and the DW video (R): 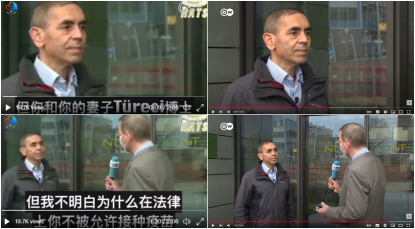 Responding to the false posts, DW published a report on December 9, 2021 stating its earlier video had been "taken out of context to push a false story".

"The video is from December 2020 before Sahim could get the jab", DW reported.

Jasmina Alatovic, a spokeswoman for BioNTech, confirmed to AFP that Sahim received his first jab in mid-January and the second on February 11, 2021.