A video of three men attacking a woman has been shared repeatedly in Chinese-language posts alongside a claim about a Chinese national who was allegedly abused by her African husband and his family. The posts go on to make claims about the percentage of people in Africa who are infected with HIV; and the average life expectancy for people across the African continent. Africans living in China have long faced discrimination, as documented in numerous interviews with AFP. But the video has been shared in a misleading context: it has circulated in media reports since June 2021 about a woman who was beaten by her family members in India. Official data shows the posts significantly inflated the percentage of Africans living with HIV, and underestimated the average life expectancy of men and women in Africa.

The two-minute, 20-second video was published here on Twitter on December 8, 2021.

The first 30 seconds of the video show a man dragging a woman by her hair as she screams in agony.

The attacker is later joined by two other men as they beat her with sticks.

It claims the video shows a Chinese woman named Chen Yi being abused by her African husband and his family after she emigrated to live with him. 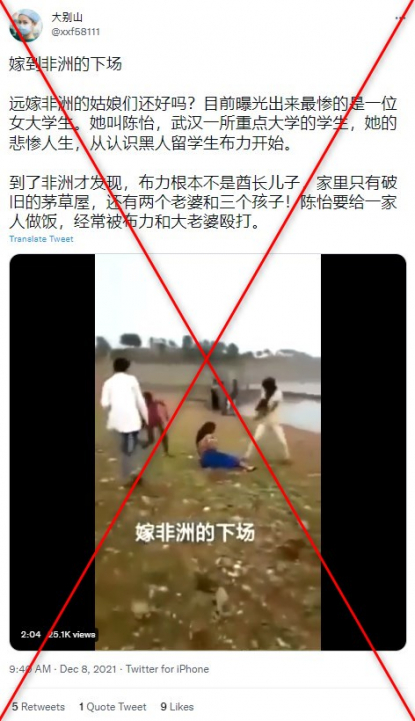 A screenshot, taken on December 9, 2021, of the misleading post.

"This is what happened when [this woman] got married [and moved] to Africa," the simplified-Chinese caption reads.

"Those girls who married [and moved] to Africa, are you okay?

"Recently, a female college student got exposed that she has the worst experience.

"Her name is Chen Yi -- a student at a top-level university in Wuhan -- and her miserable life began when she met a black guy who abused her.

"When she arrived in Africa, she realised that Buli was not the chief’s son at all. There was only a dilapidated thatched house, with two wives and three children in his family! Chen Yi has to cook for the family and is often beaten by Buli and his elder wife."

The video then cuts to footage of a Chinese man who describes the scene in similar terms in Mandarin.

He goes on to claim: "Don’t you know 25% of African males and females have HIV? And their life expectancy doesn’t even reach 45 years old."

The HIV  virus targets the immune system, making a person more vulnerable to other infections and diseases.

At one point, the video cuts to a photo that purports to show the African-Chinese couple described in the video.

It has been widely circulated alongside various different stories on Chinese clickbait websites that spread misinformation -- as seen here and here.

The discrimination that Africans face in China was once again exposed last year during a coronavirus lockdown in Guangzhou, China's largest city, AFP reported here.

Under strong international pressure, China subsequently vowed to improve the treatment of Africans in Guangzhou following accusations of discrimination -- and rejected claims of racism.

In fact, the video was filmed in India.

AFP also found no Chinese media reports or further evidence to support the posts' claims about the alleged abuse of a Chinese woman named "Chen Yi".

A reverse image search on Google has found the longer version of the video published here on Twitter on July 4, 2021 by Free Press Journal, an Indian English-language daily newspaper.

Madhya Pradesh: Two #girls were beaten by her cousin brothers as they talked to someone on phone in Pipalwa village under Tanda police station in Dhar district on June 25, 2021. This is second incident of barbarity after a woman was thrashed in #Alirajpur district last week pic.twitter.com/RGGw5QOn9M

According to the tweet, the video shows an incident in the central Indian state of Madhya Pradesh.

Below is a screenshot comparison of the first part of the video (L) and the Free Press Journal video (R): 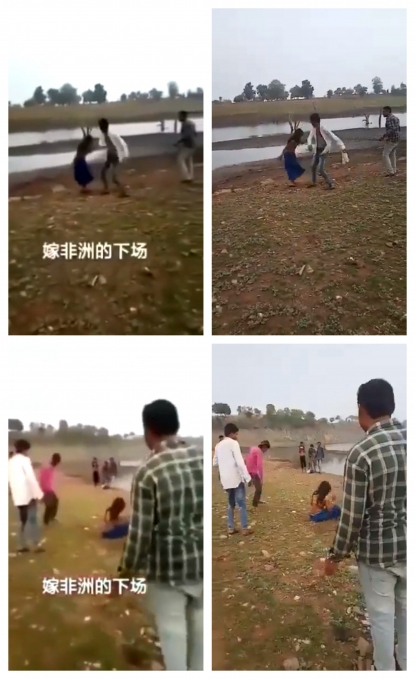 A screenshot comparison of the first part of the video (L) and the Free Press Journal video (R).

The video also significantly inflates the proportion of people infected with HIV in Africa.

According to the World Health Organization (WHO), about one in every 25 adults (3.7 percent) are living with HIV in Africa.

This accounts for more than two-thirds of all HIV-positive cases globally, making it the most severely affected region in the world.

The man speaking Mandarin in the video also falsely claims the average life expectancy for all people living in Africa is 45.

In fact, the average life expectancy for men is 63, while for women it is 66, according to the Population Reference Bureau's 2021 report published here.