A photo of a space station launch pad has been shared in multiple Facebook posts alongside a claim that a city in the Philippines will become the location for the country’s first satellite launch site. The photo, however, has been shared in a misleading context; it actually shows a launch pad at the Kennedy Space Center in the United States. The Philippine Space Agency told AFP it was still assessing plans for a satellite launch site in the country.

It shows an aerial view of a towering structure in an open field.

The caption describes it in part as: "[The] Philippines quest to space will begin in Mati City, Davao Oriental. The location of Mati which is near the equator makes it ideal for the Philippine Space Agency launch site." 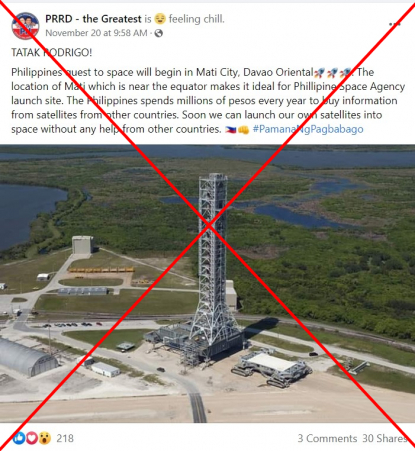 The Philippine Space Agency (PhilSA) was established in 2019 to consolidate the country’s space science and technology programs.

Before PhilSA was established, Philippine media outlet SunStar reported that Mati City in the southern Philippines was being eyed as a location for the country’s first satellite launch site.

The photo was also posted here, here and here on Facebook alongside an identical claim.

But the image was shared in a misleading context.

A reverse image search found the photo was taken from the website of the National Aeronautics and Space Administration (NASA) in the United States.

According to its caption, the image shows a crawler-transporter and mobile launcher support structure at the Kennedy Space Center.

"The [mobile launcher] can be outfitted with ground support equipment, such as umbilicals and access arms, for future rocket launches. It took about two years to construct the 355-foot-tall structure, which will support NASA's future human spaceflight program".

Its location inside the Kennedy Space Center can be seen here on Google Maps, and here on a Google street view image taken in February 2012.

Below is a screenshot comparison of the photo in the misleading posts (L) and on NASA’s website (R):

A Philippine Space Agency representative told AFP on December 6 that it was still examining proposals for a satellite launch site in Mati City.

"A launch facility would have to be carefully studied considering the cost of the infrastructure, the value it will create for the country, the plans of other countries in the region and prospects of potential partnerships", the representative said.