An image circulating on social media appears to show a statue of German philosopher Karl Marx donning a coronavirus-shaped crown and virus-patterned cloak. The posts claim locals in Marx's birth city added the details as an insult to China, which gifted them the sculpture to mark the revolutionary's 200th birthday. The image has been doctored; the original photo shows a bronze statue that was unveiled in Trier in 2018 with no crown or virus patterns.

"On the 200th anniversary of Marx's birth, China sent a bronze statue of him. German citizens put a 'coronavirus' crown and a red virus flag on the China-made bronze statue of Marx, meaning the originator of the god of plague." 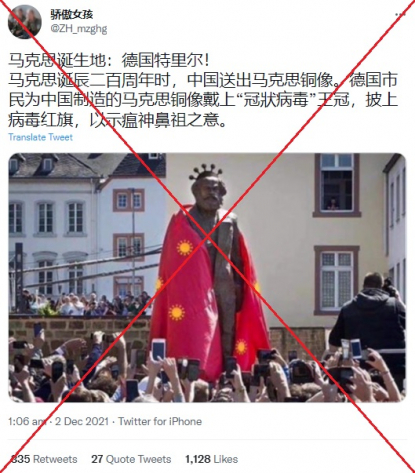 Screenshot of a tweet sharingt the doctored photo, taken on December 6, 2021

China gifted a 5.5-metre (18-foot) tall statue of the philosopher -- hailed as an ideological forefather of the Chinese Communist Party and promoted in China's education system -- to the German city of Trier in May 2018 to mark 200 years since his birth there.

The same image was shared in similar posts here and here on Twitter, and here on Facebook.

"What a retribution!" one person commented.

Anti-China hate has surged during the pandemic, with offenders blaming Chinese people for the spread of the virus that has killed more than five million people.

However, the image is doctored.

Reverse image searches and keyword searches found a similar picture published by AP news agency on May 5, 2018, more than one year before the novel coronavirus was first identified in China.

The AP photo shows the statue with no crown or virus patterns on the red cover.

The caption on AP's photo, which was taken by Michael Probst, reads: "A bronze statue showing German philosopher Karl Marx is unveiled on occasion of the 200th birthday of Marx in Trier, Germany, Saturday, May 5, 2018. The statue was created by Chinese artist Wu Weishan and is a present of China".

AFP published similar photos of the statue with no crown or patterned cloak.