Skip to main content
Thailand's King Maha Vajiralongkorn waves to royalist supporters during a ceremony to commemorate the birthday of the late Thai king Bhumibol Adulyadej at Sanam Luang in Bangkok on December 5, 2020. ( AFP / LILLIAN SUWANRUMPHA)

After United Nations countries reassessed Thailand's record on human rights as part of a new report, social media posts claimed the UN gave the kingdom "a two-month deadline" to amend its royal defamation law. The posts are misleading; although the UN said it expected Thailand to respond to its concerns within four months, any recommendations it makes are non-binding. A Thailand-based human rights lawyer told AFP the kingdom has historically "paid little attention" to requests from the international community to amend the lese-majeste law.

"We're in trouble. The United Nations has given us a two-month deadline to "amend" article 112," reads a Thai-language Facebook post.

Article 112 refers to Thailand's lese-majeste law, which prohibits defamation of King Maha Vajiralongkorn and his family.

Thai Lawyers for Human Rights reported that at least 154 people were charged with the controversial law between the start of Thailand's pro-democracy movement in mid-2020 and October 2021.

The post includes a video that features opposition politician Pradermchai Boonchuaylua questioning the Thai police's use of force against demonstrators. 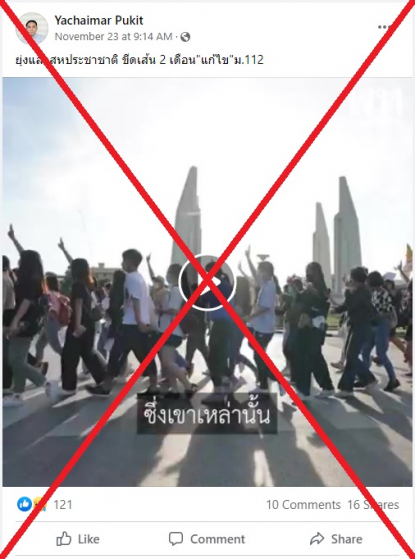 The posts surfaced online after United Nations member states picked through Thailand's human rights record in a Universal Periodic Review (UPR) -- which all 193 UN countries must undergo every four to five years --  on November 10.

While various UN member countries recommended that Thailand amend its lese-majeste law as part of a wide-ranging list of human rights concerns, the kingdom is not obliged to do so.

The UN report states Thailand must respond to its recommendations no later than the 49th session of the Human Rights Council, which is due to kick off on February 28, 2022.

"Thailand will provide responses to these recommendations no later than the 49th session which is scheduled on February 28 - March 25, 2022," Rolando Gomez, spokesman for the United Nations Human Rights Council told AFP.

"It is incorrect to state Thailand has been given two months to amend the lese-majeste law; rather, they have been given some four months to consider their position on these recommendations and then provide their final position."

If Thailand chooses not to follow the recommendations, "there is nothing the Council can do to force them to do so as they are not legally binding," he said.

"The Thai government, especially under Prime Minister Prayut, has paid little attention to requests from the international community. Thailand's use of lese majeste laws have been raised internationally on several occasions, but they have done nothing but ignore it," he told AFP on December 2.

"On the contrary,  the number of political activists have been arrested [under the law] has increased."

According to a Bangkok Post report, Thai foreign ministry representative Nadhavathna Krishnamra defended the law at the recent UN meeting, arguing it "reflects the culture and history of Thailand, where the monarchy is one of the main pillars of the nation".

Thailand’s Anti-Fake News Centre -- a government-run platform within the Ministry of Digital Economy and Society -- said claims it had been given a deadline to amend the lese-majeste law were false.