No evidence of oil spill amidst Canada floods

A photo is shared in social media posts that claim it shows an oil spill from the Trans Mountain pipeline amidst devastating floods in western Canada. But this is false; the pipeline was shut down on November 14 as a precaution, and no oil spill has been detected, according to the company and the Transportation Safety Board of Canada.

"20-Nov-2021 Trans Mountain Oil spill at Sumas Prairie Flood. Location one block from Trans Mountain," claims the text of a November 23, 2021 Facebook post that includes a picture of a flooded street with a black substance floating in the water. 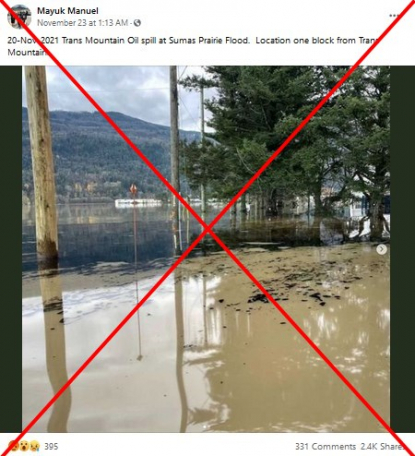 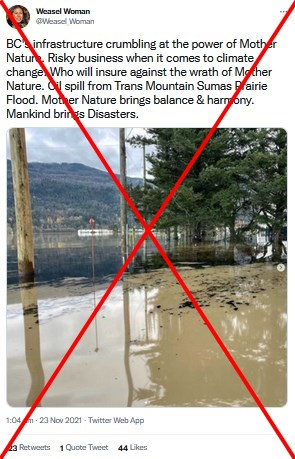 Torrential rains in November 2021 have led to devastating floods in southwestern British Columbia (BC), in western Canada.

Parts of the more than 1,000 kilometres-long Trans Mountain pipeline, which runs from Edmonton, Alberta, to Burnaby, BC, are located near the flooded areas. Screenshot taken on November 25, 2021, shows a map of the Trans Mountain pipeline

The expansion of the pipeline, which was purchased by the federal government in 2018, was met with a slew of controversies. An oil spill near Abbotsford, BC in June 2020 bolstered opposition to the pipeline from the local Sumas First Nation.

AFP was not able to independently verify the image, but there is no evidence that a spill occurred in November 2021.

A spokesman from the Transportation Safety Board of Canada (TSB), the federal agency that oversees pipeline safety, said that "there has been no occurrence involving a spill from the Trans Mountain pipeline reported to the TSB."

A spokeswoman for the Trans Mountain company also confirmed that the claims that an oil spill occurred amidst the floods are "false."

"Crews have investigated the area, and there is no indication of any loss of containment of the pipeline system," she told AFP.

A "voluntary, precautionary shutdown" of the pipeline was put in place on Sunday, November 14, "in anticipation of the impacts of the heavy rainfall and extreme weather conditions," according to a November 23 statement from the company which can be found on its website.

The company noticed minor damage to the pipeline and is now in the process of repairing it, hoping to restore operations in the coming days. "The pipeline remains safely in a static condition and there is no indication of any loss of containment or serious damage to the pipe," the statement says.