Skip to main content
Malaysian police stop motorists to inspect their travel documents at a roadblock in Kuala Lumpur during the nationwide pandemic lockdown on June 1, 2021. ( AFP / Mohd Rasfan)


A claim has circulated on social media in Malaysia that warns police are investigating a string of slash-and-grab robberies on motorists in which the culprits used knives disguised as business cards. The claim, which has circulated online since at least 2014, is false; Malaysian police said it has not received any reports of robbers using any such tactic. The posts shared photos from two incidents that were unrelated to the claim.

The claim appeared in Malaysian and Chinese in this Facebook post on November 4, 2021, which has been shared more than 300 times.

It was shared alongside three images; two of those show injured people.

The claim in both languages translates as: "According to information received from a traffic police friend, there are already six car owners who lodged police reports.

"If someone holds a business card and knocks on your car window asking for directions. Please do not open your car window, because there are cutters placed under the name card which is used for slashing the victim's face and rob.

"Please be careful. Please forward this message. Please also send to those who do not drive, for the sake of their friends who are driving." 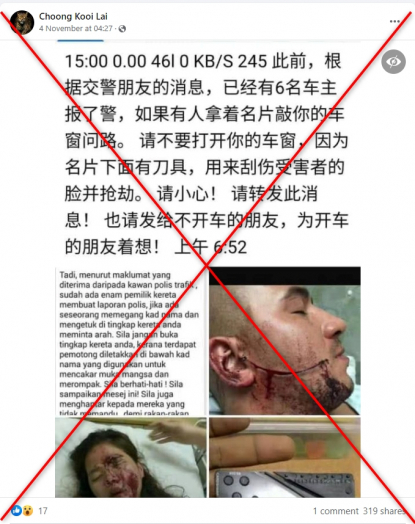 The photos of injured people were shared here and here on Twitter with a similar claim in English.

The same claim was shared without images alongside a similar claim in Malaysian here and here on Facebook.

In response to the misleading posts, the Royal Malaysia Police (PDRM) issued this media statement on November 2, 2021, on its official Facebook page.

Translated from Malaysian to English, the statement reads in part: “Royal Malaysia Police (PDRM) detected one (1) information spread through social sites and the WhatsApp application which claimed that there was an individual who knocked on the mirror on car doors while holding out a piece of card to ask for directions.

"At the same time, there was a blade on the back of the card used to injure victims before committing the robbery.

“The result of a review found, the distribution of such information already began to be viral in 2014 and was circulated again lately by irresponsible individuals ...

"PDRM confirmed there were no police reports related to robberies using such a modus operandi.

“The public is advised to not easily believe news that is baseless and whose authenticity is not determined. The act of sharing or disseminating such news will cause public anxiety and concern.”

The claim also circulated in Singapore on Facebook in 2014 here and in 2015 here.

At the time, the Singapore Police Force said no such case had been reported, according to this article, published by Singapore-based English-language newspaper The Straits Times on February 12, 2014.

The first picture shared in the posts shows a woman who was bleeding from injuries to the face.

It is about a robbery in the Malaysian city of Johor Bahru, which was reported to police on January 13, 2016. The report does not mention about any card-sized knives.

Below is a screenshot of the Rojaklah article: 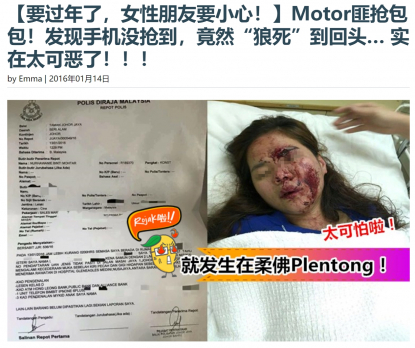 Screenshot of the Rojaklah article taken on November 24, 2021

The second photo shows a man whose face has been slashed.

A reverse image search, followed by keyword searches, found this article published on December 31, 2014, from Mail Online, the website of British tabloid The Daily Mail.

It reports on an American reality TV personality who was injured at a nightclub in Brooklyn, New York City.

Below is a screenshot of the Mail Online article:

Screenshot of The Daily Mail article taken on November 24, 2021

The third photo is a stock image of a credit-card-sized knife, which is sold as a pocket utility tool.

A similar claim was debunked by US fact-checking website Snopes in 2016 here.