A photograph of an elderly man and a young woman has been shared hundreds of times in social media posts about a 73-year-old man marrying a 29-year-old lady in China in November 2021. But the photo has been shared in a misleading context. It was originally published by a Chinese influencer in 2018, and shows her and her grandfather.

A screenshot containing the photo was published on Facebook here on November 20, 2021. 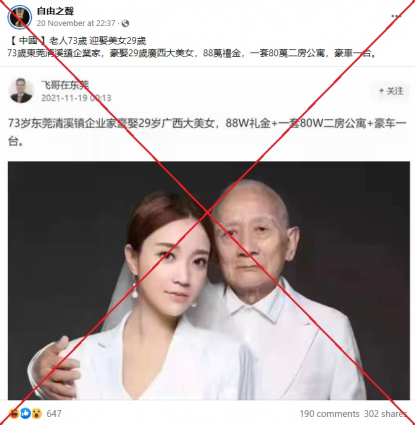 The screenshot containing the photo has a similar description.

Dongguan is a city in southeast China's Guangdong province. Guangxi is a southern Chinese autonomous region adjacent to Guangdong.

The same screenshot containing the photo was also shared on Facebook here and here, and on Twitter here and here.

But the photo shows a Chinese influencer and her grandfather.

A keyword search found the photo was shared on Weibo here on November 21, 2021 by an online influencer called Niki.

"The photo shared out of context was taken from my post published on Xiaohongshu on December 29, 2018," Niki wrote.

The original post is headlined: "30 small things worth trying with grandfather | All my efforts are just for the hope that he could age slowly (Part One)".

The first two paragraphs read: "I was brought up by my grandparents. They are far more important to me than my parents.

"Grandmother passed away painfully last November after fighting lung cancer for half a year, and Grandfather looks much older this year. What worries me most is that his aging would be accelerated if he doesn't get to know new things. So the way I accompany him every day is very simple. Just treat him like my peers, and let him gradually have the feeling of 'I'm not so old'."

Below is a screenshot comparison of the photo in the misleading posts (L) and the photo posted by Niki in 2018 (R):

In a separate post published on November 21, 2021, Niki said she was determined to secure her rights against the rumour, and is now seeking legal help on the issue.

Contacted by AFP, Niki also confirmed in a Weibo message on November 24, 2021 that she published the original photo and it shows her and her grandfather.

The same photo being misleadingly shared has been reported by Chinese state newspaper People's Daily here, and Chinese newspaper Beijing Youth Daily here. Both reports state the social media account where the rumour originated has been banned.

Chinese state news app Red Star News later reported that the person who started the rumour was placed in criminal detention on November 23, 2021 by the police in Dongguan.

Keyword searches did not find credible reports of a 73-year-old man from Dongguan marrying a 29-year-old Guangxi woman in November.