A photo of a Sri Lankan minister is circulating in Facebook posts claiming he joined a protest by Sri Lankan opposition party Samagi Jana Balawegaya (SJB) in November 2021. The claim is false; the picture was taken in 2017, when Ports and Shipping Minister Rohitha Abegunawardhana -- who was a member of the opposition at the time -- attended a protest against the then-government. 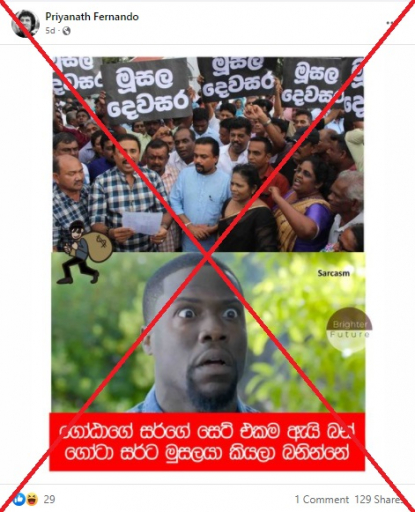 However, the claim is false; the photo does not show Abegunawardhana taking part in the November 16 marches.

A keyword search on Facebook led to a video published on August 18, 2017 by local television channel Hiru TV about a protest organised by then-opposition leaders to highlight what they saw as government failures two years after taking office.

The video shows the same placards seen in the photo shared in misleading posts. It also shows Abegunawardana -- seen in a checkered shirt and holding a sheet of paper -- participating in the protest from the 0:22 timestamp.

Below is a screenshot comparison of the image in the misleading post (left) and the Hiru News video (right) with similarities highlighted in red by AFP.

The slogan 'Two unlucky years' was posted in a Facebook post on August 17, 2017 by Sri Lanka Podujana Peramuna (SLPP), which was the opposition party at the time.

Photos from another Facebook post published on August 18, 2017 feature similar scenes of then-MP Abegunawardhana taking part in the march.

The SLPP is currently the leading party of the coalition government in power after Rajapaksa was elected president in 2019.