A video report viewed more than one million times on Facebook claims to show a new plastic banknote that will be circulated in Pakistan in early 2022. The claim is false; Pakistan's central bank said it had not commissioned the purported banknote, adding it was still "studying the viability" of using plastic notes in the future. Separately, a student at a Pakistan university told AFP he designed the banknotes shown in the video for a project.

"New currency note Pakistan," reads the caption alongside the video.

The video's narrator says in Urdu: "New Year and new currency. Pakistanis will have to use plastic banknotes from the new year."

"The colour and design of the 50-rupee note have been completely changed. The red 100-rupee currency note will now be green and will have the photo of Islamia College Peshawar on both sides. It will be made of plastic. The 500 and 1,000-rupee notes will also be made of plastic," he continues.

"The new plastic notes have been designed by a Fine Arts student of Peshawar University Noor ul Hassan." 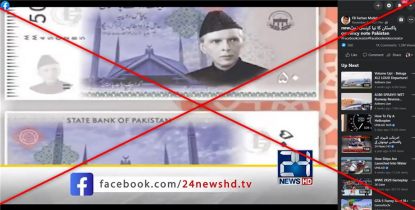 However, the State Bank of Pakistan (SBP) said it did not commission the notes shown in the reports.

"The design of polymer (plastic) banknotes circulating in social media is an artwork of a student of Peshawar University, which has not been commissioned by the State Bank," a spokesman told AFP.

"SBP is currently studying the viability of polymer notes keeping in view the use of currency notes by the general public and its overall cost. Any decision to consider polymer currency notes will be made based on the results of the feasibility study."

On November 9, Peshawar University posted a video on Facebook which features the same design shown in the misleading reports.

"Designing new banknotes is Noor ul Hassan's thesis topic for the completion of his master's degree," the narrator says in Pashto.

"His supervisor, Assistant Professor Younas Masood says that he chose a difficult topic for his thesis but worked hard to complete it."

Below is a screenshot comparison of the banknote featured in the misleading Facebook posts (L) and in Peshawar University's video (R):

Hassan told AFP he designed the banknotes for his master's degree dissertation, which he said had "no connection" to the SBP.

"It was for my thesis. Every student selects a topic and has to say how useful it can be. I selected currency design and said it will not only attract tourism but will also be more secure if printed on plastic material instead of paper, to curb the menace of counterfeit currency," he said.

"The State Bank has no connection with my thesis."