Image shows Muslims praying outside a mosque in Bangladesh

After members of Hindu right-wing groups were arrested in India for disrupting Muslim prayer gatherings, an image showing Muslims praying on the street circulated on Facebook and Twitter with a claim that it was shot in India. The claim is false; the image shows Muslims praying outside a mosque in Bangladesh -- not in India.

"This secular scene is only visible in India, if this happens in other Muslim nations they will be jailed," reads the Hindi-language caption to the image shared on Facebook on November 11.

"This is just testing the patience of Hindus so that it can be proved how much they can oppress us." 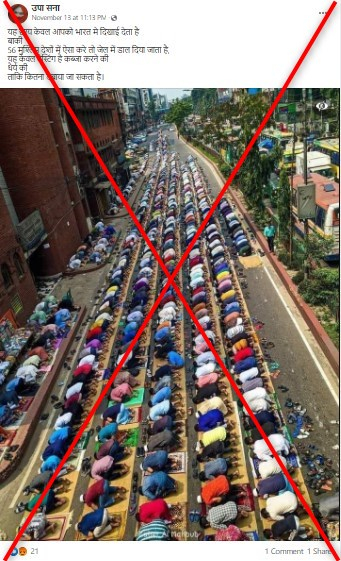 The image circulated online after dozens of people, many from Hindu right-wing groups, were arrested in India late October for disrupting Muslim prayer gatherings in the latest sign of growing sectarian tensions.

Hindu groups have been pressuring authorities for weeks in the northern city of Gurgaon on the outskirts of New Delhi to stop Muslims from offering Friday prayers in open spaces.

AFP reported on the arrests here.

The image was also shared with a similar claim on Facebook here and here, and on Twitter here.

But the claim is false; the image was shot in Bangladesh.

Combined reverse image and keyword searches on Google found the European Press Agency (EPA) published a similar photo shot from outside the same mosque on April 30. The photo could be viewed on EPA's website here.

The EPA photo's caption reads: "Muslims attend the Friday prayer during the holy month of Ramadan outside the Sobhanbag Mosque amid lockdown in Dhaka, Bangladesh, 30 April 2021. Bangladeshi authorities extended the nationwide lockdown for one more week amid rising COVID-19 infections. EPA-EFE/MONIRUL ALAM". 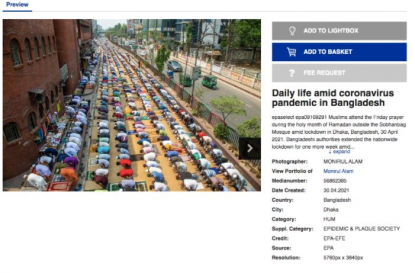 The location of the image in the false posts and the EPA photo correspond to this Google Street View of the Sobhanbag Mosque in the Bangladeshi capital Dhaka.

Below is a screenshot comparison of the image in the false posts (left), the EPA photo (center) and the Google street imagery of the Sobhanbag Mosque in Dhaka (right).

Screenshot comparison of the image in the false posts (left), the EPA photo (center) and the Google street imagery of the Sobhanbag Mosque in Dhaka (right)