Skip to main content
Children from Pu Phar village, displaced after fighting between the military and members of the People's Defence Force, attend a school lesson under a makeshift structure as they take refuge in the jungle near Demoso, Kayah state in Myanmar on July 3, 2021 ( AFP / STR)

"November 12th. On behalf of the Chinese government, the Chinese embassy in Myanmar donated materials and cash totalling RMB 1.16 billion to the Ministry of Education of Myanmar for the 2022 free lunch programme for all primary and secondary school students in Myanmar," reads a screenshot posted on Twitter on November 16.

"Chen Hai, China's ambassador to Myanmar, said that they want to make sure Myanmar's next generation feels the achievements of China's development".

The screenshot features a photo of two officials in front of the Chinese national flag and a wall reading "Embassy in Myanmar" in Chinese and "THE PEOPLE'S REPUBLIC OF CHINA" in English.

The traditional Chinese tweet reads: "Have Chinese children experienced it?" 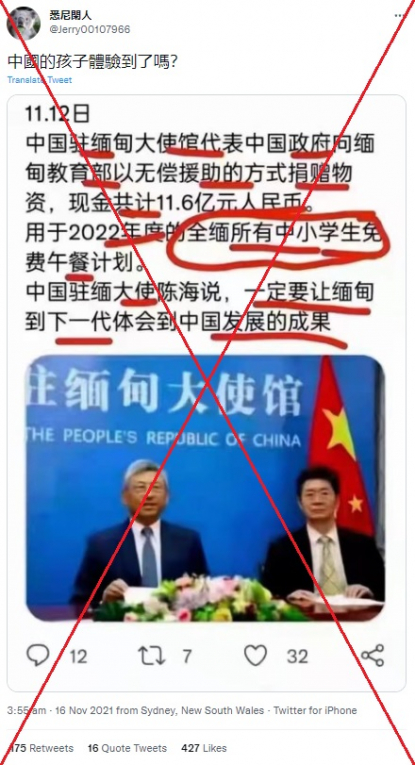 Screenshot of a tweet sharing the misleading claim, taken on November 18, 2021

Similar reports were shared here and here on Twitter.

A reverse image search on Chinese search engine Baidu found the photo showing the two officials in a report about Chinese vaccines sent to Myanmar, published on November 12 on the Chinese embassy in Myanmar's website.

The headline reads: "A new batch of Covid-19 vaccines from Chinese government arrives in Yangon".

Below is a screenshot comparison of the image shared in misleading posts (left) and the report on vaccines (right):

The Chinese embassy in Myanmar refuted reports about a purported donation to the education ministry.

"The texts in the tweet are totally fabricated and the photo alongside the texts was taken from a news picture of the handover ceremony of China's aid to Myanmar vaccine on November 12," a spokesperson told AFP.

"Since this year, China has provided Myanmar with 8.9 million doses Covid-19 vaccine and many batches of anti-epidemic materials. The embassy has also carried out many donation projects for Myanmar students, the disabled, hospitalized children and other groups."