An image purporting to show top South Korean officials smiling underneath a banner welcoming North Korea's leader Kim Jong-un has been shared in multiple Facebook posts in South Korea. The image, however, has been doctored. It was created by combining two photographs taken at different locations.

The image was shared here on Facebook on November 17, 2021, alongside Korean-language text that states, "Strange people." 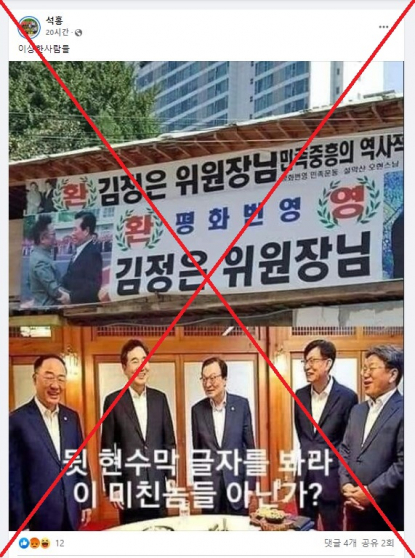 Text superimposed on the bottom of the image reads: "Look at the letters on the banner in the back. Aren't these lunatics?"

However, the image is doctored by combining two unrelated photographs.

A photo of the banner posted in September 2018 has been cropped and digitally inserted onto a photo showing the officials meeting in August 2019.

A reverse image search on Google found the photo of the banner was posted here on Naver Blog, a South Korean social media platform.

The post, dated to November 26, 2018, includes the caption: "A banner welcoming Kim Jong-un brazenly hung up in the middle of Chungjeong-ro in the Republic of Korea!!!"

Below is a screenshot comparison of the top section of the doctored image (left) and the original photo posted on Naver Blog (right):

The original photo shows an apartment complex, with the word "Richion" visible on its side, towering behind the building holding the banner.

Using Google Maps, AFP was able to geolocate the building as the Daerim Chungjeong Richion Apartment at Chungjeong-ro in Seoul, as seen below.

Below is a screenshot comparison of the bottom section of the doctored image (left) and the original photo published by Yonhap News (right):

The photo's caption reads, "Prime Minister Lee Nak-yon chats with participants of a high-ranking party, government and Blue House officials meeting held at the Prime Minister's Office in Samcheong-dong, Jongno District, Seoul on the morning of the 27th.

Other photographs of the same officials at the meeting can be seen here and here on Yonhap News, as well as here and here published by Newspim, another South Korean news agency.