A photo of Pakistan's Human Rights Minister Shireen Mazari is circulating in social media posts claiming she was the only person wearing a face mask at a meeting with the Taliban foreign minister. The claim is misleading; while most delegates in the photo are not wearing masks, the original image has been cropped to remove a member of the Afghan delegation and people in the background who were wearing face coverings.

"Pakistan Human Rights Minister @ShireenMazari1 was the only one with a full mask on face during a meeting with Taliban’s Foreign Minister Ameer Khan Muttaqi," reads a tweet posted on November 13.

The photo shows Pakistan's Human Rights Minister Shireen Mazari and various other delegates posing for a photo. Mazari appears to be the only person in the photo with a mask covering her nose and mouth. 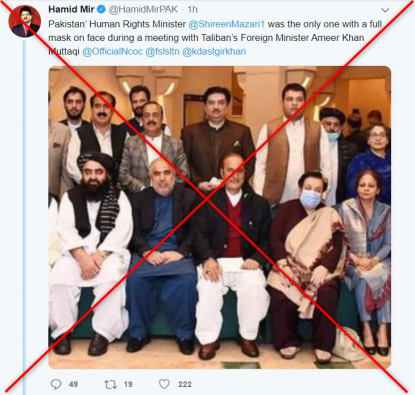 Screenshot of a tweet sharing the misleading claim, taken on November 18, 2021.

A reverse image search found a wider version of the photo published on November 13 in a report by Pakistani newspaper The Nation.

The wider photo shows a man wearing a face mask who has been cropped out of the photo shared on social media.

Several people in the background wearing masks have also been removed from the picture.

Screenshot comparing the cropped image (left) and the original (right) taken on November 18, 2021.

Mazari also tweeted the wider version of the photo on November 14.

Had an interesting interaction, along with parl colleagues, with Afghan acting FM Muttaqi. Asked him about women working & girls education amongst other issues. He categorically stated they had already re-opened 75% schools & would open rest soon. Wld be no ban on women working pic.twitter.com/h3nEfSBli3

Pakistan's Covid-19 response body issued guidelines on the mandatory use of face masks for public gatherings in December 2020.