A video has been viewed tens of thousands of times in Facebook posts that claim it shows the Ram temple in the Indian city of Ayodhya in Uttar Pradesh collapsing into a river. The claim is false; the video was filmed in West Bengal and has circulated in news reports about a temple that eroded into a river.

"Where Ram temple has been built in place of Babri mosque. That Ram temple is mixing with water today," reads a Bengali-language Facebook post shared on November 2.

The video -- viewed more than 35,000 times -- shows a building collapsing into a river, while people in the background are heard screaming.

A temple for the Hindu god Ram is under construction in Ayodha in the Indian state of Uttar Pradesh.

The site has become a symbol of India's Hindu-Muslim divide as a 16th century mosque called Babri used to sit on the same patch of land.

In 1992, tens of thousands of Hindus tore down the mosque to pave the way for a temple. 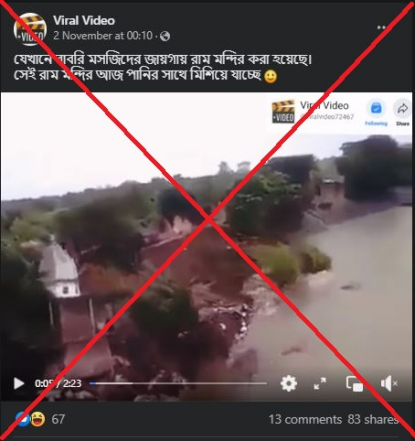 The same video was shared here and here in similar Facebook posts.

The YouTube video is titled: "A Shiva Temple has been destroyed today" and states that the temple is located in Mathurapur town in Malda district in West Bengal.

Below is a screenshot comparison of the video in the misleading posts (left) and YouTube video (right), with the corresponding features highlighted.

A similar video of the incident was aired by Indian media organisation News 18 on October 25, 2019.

"Erosion in a river in Malda, the temple sank in the riverbed", the Bengali report reads.

The location of the incident can be found here on Google Street View.

Below is a screenshot comparison of the video in the misleading posts (left) and a Google Street View of the temple's location in Mathurapur (right).