A video has been viewed tens of thousands of times in social media posts that claim it shows Hongkongers celebrating Huawei executive Meng Wanzhou's return to China after she spent three years under house arrest in Canada. The claim is false; the footage shows crowds in 2019 singing a pro-democracy anthem. The audio has been manipulated to make it sound like they are singing a patriotic Chinese song.

"Ode to the Motherland" is a patriotic song associated with the ruling Chinese Communist Party. China's National Day on October 1 -- which marks the anniversary of the founding of the People's Republic of China -- is traditionally a day of protest in Hong Kong.

The video, which has been viewed more than 20,000 times, shows crowds in a shopping mall singing. 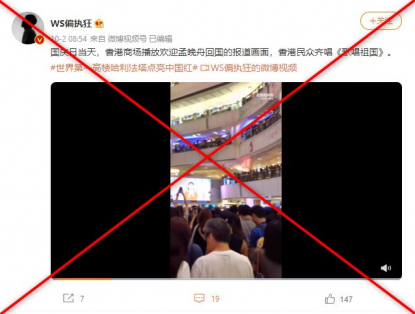 Meng returned to China on September 25 after three years under house arrest in Canada, fighting extradition to the United States on fraud charges. The court proceedings against Meng -- the daughter of Huawei founder Ren Zhengfei -- increasingly saw her transformed into a symbol for Chinese national interests.

The video circulated in similar posts on Weibo and the Chinese version of TikTok, Douyin.

A reverse image search on Google found a longer version of the video posted here on YouTube on September 13, 2019. 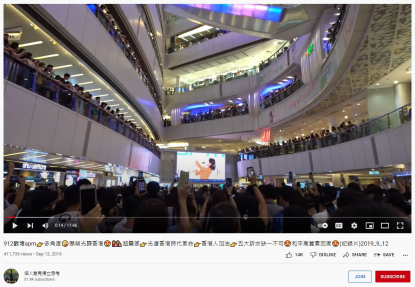 The gathering at the mall in Hong Kong's Kwun Tong neighbourhood was one of a wave of pro-democracy demonstrations at shopping centres across the city on September 12, 2019, local news outlet Pop News reported.

"Glory to Hong Kong" became the unofficial anthem of the 2019 protests in Hong Kong, with crowds breaking into song in malls, football stadiums and on the streets.

The protests were ignited by opposition to an extradition bill that would have allowed Hong Kong to face trial in mainland China, but quickly evolved to make five key demands, including the resignation of city leader Carrie Lam and an investigation into police violence.

Below is a screenshot comparison of the video shared in misleading posts (left) and the longer version of the footage posted on YouTube in 2019 (right), with similarities highlighted by AFP. 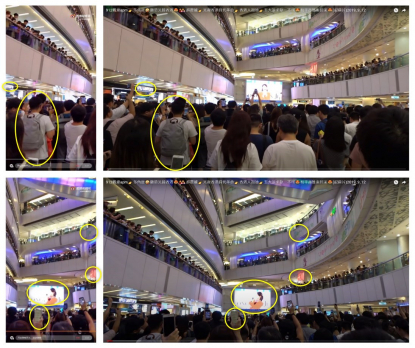 A keyword search on Baidu traced the audio in the misleading video to a video posted on Douyin September 25, 2021. The caption says that it shows crowds at China's Shenzhen airport singing "Ode to the Motherland" as they await the arrival of Meng Wanzhou.

"Tens of thousands of people gathered in Shenzhen airport singing 'Ode to the Motherland' #Welcome Meng Wanzhou back home," the video's title reads. 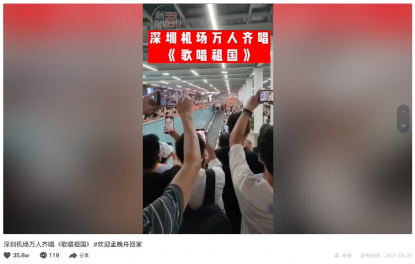 Audio software indicates the sound in the misleading video (top) matches that in the Douyin video (bottom).