Skip to main content
A visitor looks at the blood vessels of the viscera of a human body in VAM Design Center of Budapest on April 2, 2012 during an exhibition of the 'Bodies2' ( AFP / ATTILA KISBENEDEK)

A homemade remedy to 'detoxify' blood vessels which uses sugarcane and pandan leaves has been circulating for years on social media in Thailand. However, the claim is false; health experts said there was no evidence that the recipe can help clear blood vessels.

Pandan is an aromatic plant whose fragrant leaves are used in South Asian cuisine.

"Recipe to detoxify your capillaries. Your capillaries could become narrow from different types of junk food, such as fat, sugar, chemicals and uric acid, which results in high blood pressure, weakness and numbness in the arms and legs. When your blood vessels are dirty, they will become narrow. You can go into shock, become faint, suffer paralysis or cardiac arrest." 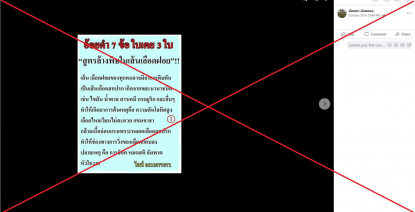 The remedy has circulated in similar posts since at least 2013, including here, here and here.

Dr Tassanee Tantirittisak, president of Neurological Society of Thailand said there was no evidence that the recipe works.

"There is no information to prove that the purported recipe detoxifies blood vessels or capillaries," she told AFP on November 16.

"The most dangerous blood vessel diseases are in the brain and heart, which may result in paralysis and death. We can treat the patients by giving them medications to prevent the blood vessels [including capillaries] from blocking, performing an injection to dissolve blood clots or using a catheter to enlarge the vessel and remove the blood clots," she added.

Dr Jagravudh Puagkong, director of the Institute of Thai Traditional Medicine, which is run by the Ministry of Public Health, also said there was no recommendation on the use of sugar cane and pandan leaves as a treatment for any diseases.

"According to the evidence on Thai traditional herbal medicine, there is no record of the purported recipe for treatment," he told AFP on November 16.

"It is believed that sugar cane can help with fatigue, while pandan can relieve dizziness, but it can't cure any diseases and it should not be drunk as a replacement for water," he said.

Dr Tassanee said the most common reason for blood vessels narrowing is lifestyle.

"Vascular diseases happen when the lipid blocks your blood flow and is stuck in your vascular walls. This can be caused by a lot of smoking cigarettes or eating food with high content of fat," she said.

"Capillaries can also get blocked. Although it might take longer for symptoms to show, it can be dangerous."