A graphic video that shows a woman stoned to death in Afghanistan has been viewed tens of thousands of times on Twitter alongside a claim it was filmed in November 2021. The clip circulated online almost three months after the Taliban seized power of the country following a nearly 20-year insurgency. But the video has been shared in a misleading context; it shows a woman who was stoned to death in Afghanistan in 2015.

"People being subjected to such Horrifying punishments without Knowing their Crimes. And the World is a Usual Silent Spectator, Talibans stoning a woman some where in Afghanistan." 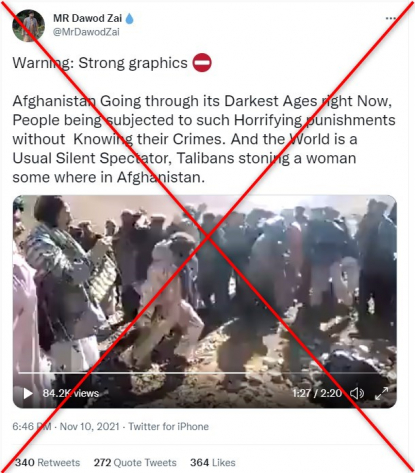 The video was also viewed alongside an identical claim in November 2021 Twitter posts -- here, here and here.

The video was also shared here on Twitter alongside a similar claim by Ihtesham Afghan, a leader of the Pakistan-based Pashtun Tahafuz Movement, an organisation that advocates for the rights of ethnic Pashtuns.

Comments from some users on the posts suggested they were misled and thought the video was recent.

"My Good Lord how is this inhumane treatment of any human being possible in 2021!" one wrote.

"This is 100% Joe Biden's fault," said another, referring to the current US president.

However, the video shows an incident in 2015.

The report is titled: "Concerns Raised Over Women's 'Death By Stoning' Sentence".

Below is a screenshot comparison of the video in the misleading posts (L) and a corresponding keyframe from the Tolo News report (R):

Certain elements in the video also correspond with footage embedded in this report by Radio Free Europe/Radio Liberty (RFE/RL) on November 2, 2015.

"RFE/RL's Radio Free Afghanistan has obtained video footage from an eyewitness that appears to show the brutal stoning last week of a 19-year-old Afghan woman in the central province of Ghor", the report reads.

Below is a screenshot comparison of the video in the misleading posts (L) and the one RFE/RL published in 2015 (R):

"The scenario that the video you are asking about is from the same stoning incident, but taken from a different angle, up closer, and a bit of a time offset is certainly plausible", an RFE/RL spokesperson told AFP.

"Local reporters in Ghor were only aware of the one stoning of a woman – the case of Rokshana in 2015. We also are aware that there were other video clips in circulation of the episode."

AFP reported on the same incident on November 4, 2015.

"A young Afghan woman was stoned to death after being accused of adultery, officials said Tuesday, a medieval punishment apparently recorded in a video that harks back to the dark days of Taliban rule", AFP reported in 2015.

"The 30-second clip run in Afghan media shows a woman in a hole in the ground as turbaned men gather around and hurl stones at her with chilling nonchalance."