Numerous social media posts have circulated a claim that the leader of road transport workers in Nigeria’s megacity Lagos, Musiliu Ayinde Akinsanya, was honoured with a doctorate degree by the Institute of Corporate and Public Sector Professionals (ICPSP). However, the claim is false: Akinsanya was granted “honourary fellow membership” to the institute, which has no powers to confer degrees in the first place.

The posts feature an image of the Lagos chairman of the Nigerian Union of Road Transport Workers, Musiliu Ayinde Akinsanya, otherwise known as Mc Oluomo, in a red-and-yellow academic gown holding a plaque and a certificate.

“MC Oluomo bagged his latest doctorate degree certification. In what? Is the question we are here to ask our fellow Nigerians,” reads the post published by a Facebook page called “Wazobia Entertainment TV” with more than 100,000 followers. 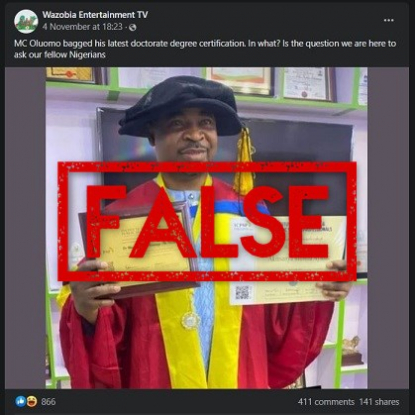 The same claim was also published by Nigerian daily newspapers Vanguard and The Nation, as well as Legit NG, which is the country’s most visited domestic news site, according to Alexa website traffic rankings.

Akinsanya is an influential trade union leader who rose from being a bus conductor in Lagos to become a prominent member of Nigerian society, according to Nigerian daily newspaper This Day.

Although AFP Fact Check could not establish whether or not Akinsanya has a university degree, his recent recognition by academic and professional institutions has sparked conversations about his academic background.

The ICPSP of Nigeria is a nonprofit membership and research organisation for corporate and public sector professionals. It is not among degree-awarding institutions in Nigeria, according to official records (see here, here, here, here and here).

AFP Fact Check conducted a search on social media monitoring tool CrowdTangle and found a post about Akinsanya’s recognition on the official Instagram page of the institute.

“It is with great pleasure that we welcome Dr Musiliu Ayinde Akinsanya aka Mc Oluomo Into The institute of Corporate and Public Sector Professionals as Honorary Fellow (HFCPSP),”  reads the caption of the post accompanied by 10 images similar to the photo in the false posts.

Although the post has now been edited and the title of “doctor” removed, we previously archived it here. 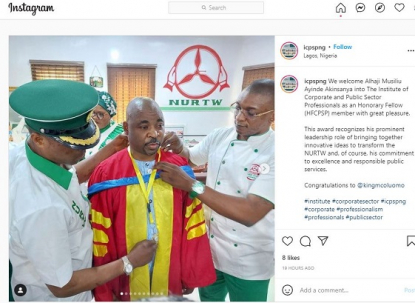 “The Institute may grant honorary fellow membership to any reputable professional who have contributed immensely and or rendered outstanding service to humanity, or the promotion of ICPSP objectives,” the ICPSP says on its website, with no mention of degrees or doctorates offered to the public.

“The award is the highest membership grade of the institute, which can be given to anybody,” Adelakun said.

This recognition did not confer the title of “doctor” on a recipient, Adelakun added.

AFP Fact Check later observed that the ICPSP’s Instagram post was edited with several changes, including the removal of the title of “Dr” and “Mc Oluomo”. 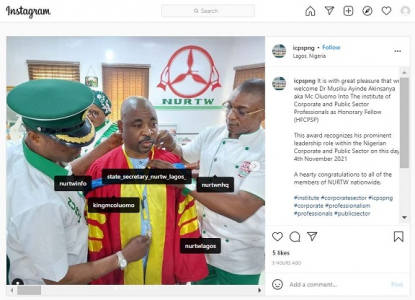 Akinsanya himself posted images and a video on his Facebook and Instagram pages, saying he was made an “honourary member of the Institute of Corporate and Public Sector Professionals”.

He made no mention of a doctorate degree but said he would be conferred with an “Honorary Degree by American Heritage University, California, USA, next year February in recognition of his selfless service and doggedness towards his profession.”