A photo of South Korean presidential candidate Lee Jae-myung is circulating in social media posts in November 2021 that claim it shows himtexting after his wife was admitted to hospital. The claim is false; the photo was taken in November 2018 and shows Lee using his phone in his car after attending a parliamentary seminar.

The image was shared here on Facebook on November 10.

The Korean text superimposed on the image reads: "[Lee] is using KakaoTalk....after hospitalising his wife".

KakaoTalk is a messaging app widely used in South Korea. 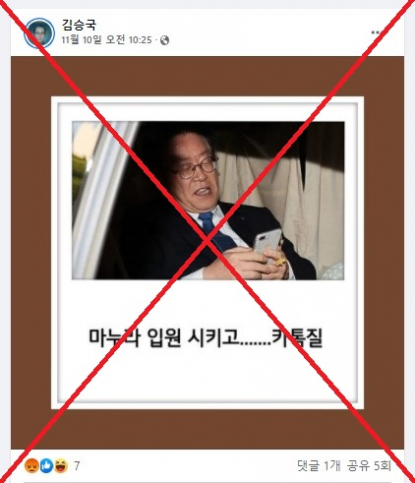 Screenshot of the misleading claim shared on Facebook taken on November 12, 2021. ( AFP)

Lee is South Korea's ruling Democratic Party's candidate for the 2022 presidential election. Before his nomination, Lee served as governor of Gyeonggi Province.

The image circulated online after Lee announced on November 9 he would cancel all campaign events after his wife was hospitalised, local media reported.

At that time, Lee's party rejected reports that he had physically harmed his wife.

The identical image was shared in similar Facebook posts here, here and here.

"Gyeonggi Governor Lee Jae-myung looks at his mobile phone in his car after attending the 2018 National Assembly seminar on railway policy held at the National Assembly's library in Yeouido, Seoul, on the afternoon of the 20th. 2018.11.20," the photo's Korean-language caption reads. 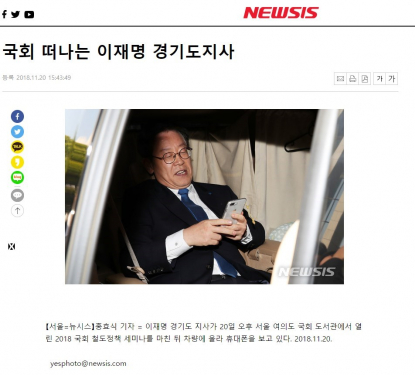 Screenshot of the original photo from Newsis taken on November 12, 2021.

Below is a screenshot comparison of the photo shared on Facebook (left) and the original Newsis photo (right):

Screenshot comparison of the photo shared on Facebook (L) and the original photo from Newsis (R).

The same photo was used in various news reports in November 2018, including here and here.