This old photo has circulated online since at least October 2020

A photo of military vehicles at a railway station in China is circulating on social media in November 2021 as tensions escalate between Beijing and Taiwan. However, the posts are misleading; the picture -- which the posts portray as recent -- has circulated online since at least October 2020.

The photo was shared on November 2 in this post captioned: "Circulating everywhere today. Grain and oil stocks rose sharply. This picture has been shared in my class chat group".

It shows several military vehicles standing on a transporter at a railway station as a crowd of people take photos. A Chinese sign circled in red in the post reads "Fuzhou Station".

Fuzhou is a city in southeast China's Fujian province, separated by a narrow stretch of water from Taiwan. Taiwan's Defence Minister Chiu Kuo-cheng said in October that military tensions between China and Taiwan were the "grimmest in the more than 40 years", adding Beijing would be in a position to launch a full-scale invasion in 2025.

Taiwan lives under the constant threat of invasion by China, which views the self-ruled democratic island as its territory to be seized one day, by force if necessary.

China has intensified efforts in recent years to isolate Taiwan on the international stage, bristling at any attempt to treat it as an independent state.

The same image of the military vehicles was shared on various social media platforms in November 2021, including in this forum post titled "President Xi is about to open fire", and here and here on Twitter.

Some social media users appeared to believe the photo was taken recently.

"Maybe when we wake up, Taiwan will belong to the Chinese Communist Party", one person commented on November 3.

"My father-in-law and mother-in-law said in the chat group this morning that they wanted to store necessities and were afraid of a fight. My husband comforted them and said don't worry about it," another wrote on November 2.

A reverse image search on Google found the same photo published on Twitter on October 30, 2020.

Below is a screenshot comparison of the image shared in misleading posts (left) and the image posted on Twitter in October 2020 (right). 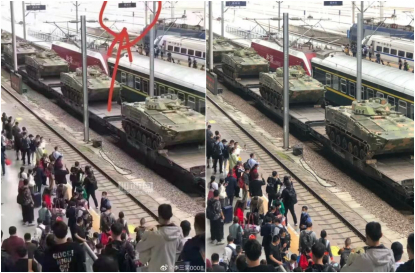 The same photo was also uploaded in October 2020 here on Weibo and here on Twitter.

"A combined-arms brigade under the PLA 73rd Group Army explored operational mode of long-distance sea navigation and landing by light vessels through a recent combat landing drill in the sea areas of southern Fujian Province," it reported.

AFP was unable to verify if the military drill described in the reports was related to the photo of military vehicles shared online in November 2021.