New Jersey vote count update is not evidence of fraud

Social media posts claim a late-night change in the vote count in New Jersey's gubernatorial race is proof of fraud, with some providing images of election results as evidence. This is false; a local official said the vote change in Bergen County reflected the addition of results from mail-in ballots, while a spokeswoman for New Jersey's secretary of state also rejected the election fraud claim.

"We need to know EXACTLY what happened at 1:54am in Bergen County," New Jersey politician Tricia Flanagan tweeted on the morning of November 3, 2021, the day after the Garden State voted for governor.

The tweet features a video that shows live results for the state's election. At one point, it shows Bergen County, the state's most populous, with 100 percent of results "in," and Republican candidate Jack Ciattarelli leading with 52 percent of the vote.

A later image shows Democratic incumbent Phil Murphy had moved ahead in the county, and considerably reduced Ciattarelli's state-wide lead of 42,000 votes. "The same sort of shady vote-flipping we watched in the 2020 election. Audit New Jersey," the video's narrator says. 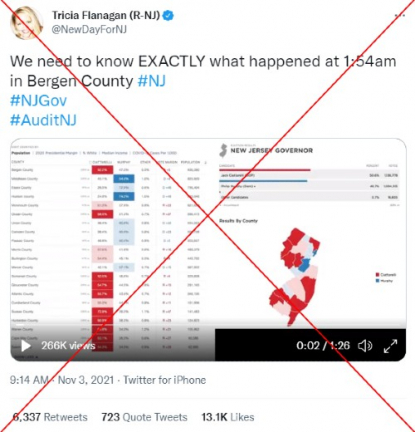 The allegations about the New Jersey vote echo false claims of fraud in the 2020 presidential election made by Donald Trump and his supporters, notably when a late-night update in Wisconsin was falsely cited as evidence of wrongdoing.

The images used in the video show NPR's live election web page, based on Associated Press election data. The changes to the results pictured in the video were real, but they do not reflect fraud.

"Those results were counted according to state law," Sabrina Taranto, supervisor of the Bergen County Clerk's Election Division, told AFP.

"We have 70 towns in Bergen, and we do multiple uploads throughout the night, at 20 percent, 50 percent, 75 percent, and at the end of the night, when all 70 towns have delivered their materials, it will read 100 percent," she explained.

However, this number only includes the votes cast in person on election day, which her office handles, Taranto said.

The second image in the video reflected new totals after some of the absentee ballots were added to the count.

Taranto lamented the misunderstanding, but said that "you can have confidence in our results."

Of calls for an audit, she said: "We live in a state where it's required that after every election, big or small, there is an audit process, so you can know that New Jersey always does its due diligence."

Alicia D'Alessandro, a spokeswoman for New Jersey's secretary of state, also said the posts are not evidence of fraud.

"In the past several years, we've come to expect misinformation and disinformation for, during and after elections," she said, adding: "Unfortunately in the internet age, there are some people who wanna look for a nefarious explanation of something they see."

AFP Fact Check has debunked other inaccurate claims about US politics here.